A Role Model for Another Generation 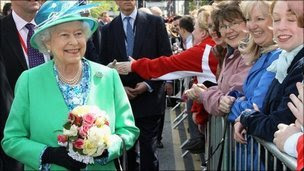 People often speak of the need for good role models for the young but, in my experience, it’s not the youth who need role models so much as older people! In fact, it is quite often older people who are very set in their ways and love to complain (and they probably complained about something else when young) who speak of the ‘youth of today’ as being so wayward.

It was ever thus. This is a quotation from Socrates in the 3rd Century B.C. ”Young people today love luxury; they have bad manners, contempt for authority; they disrespect their elders and love chatter in place of exercise. Young people now are tyrants...They no longer rise when elders enter the room. They contradict their parents, chatter before company, gobble up dainties at the table, cross their legs, and tyrannise their teachers....”

It’s not politically correct to admit this but walking into shopping centres or queuing in the Post Office, it isn’t young people who drop the door in your face or ram their shopping trolley into your ankles or moan and sigh about the length of the queue – it is more often than not elderly people.

I would (smilingly – tongue in cheek) misquote Socrates by saying that quite often, “Elderly people today love being waited upon; they have bad manners,contempt for the young; they love to discuss their ailments instead of their successes. Some elderly people now are tyrants....”

Of course, this is a huge generalisation but I do believe that some people of more mature years have a greater need of role models than the young...and in Ireland this week, the Queen displayed all that is finest in her generation and what a great role model she is! Dignified, sensitive, devoted to her life’s calling, tactful, courageous, demonstrating both humility and dignity, using her years of experience to know exactly how to respond and converse with people of all different backgrounds, striding over that field towards the castle....

People might say, “Oh well, it’s different for her – she has always been waited upon....” but I know very few people (in fact none) of her age who have such a busy schedule and always appear at their best, smiling and being genuinely interested in other people. No matter how luxurious a lifestyle might appear, it’s tiring to travel and to fit in with a tight plan of events. Only a few weeks ago, she was entertaining people at Prince William’s wedding. In a few days she will be entertaining President Obama....and between those two events she managed to fit in one of the most historically significant visits of her reign! What a beautiful thing to see her interacting with the people of Cork today!

Let’s remember, too, that the Queen hasn’t been immune from family scandals, tragedies and dramas. She is the daughter of a reluctant king who suffered from a dreadful lack of self-esteem and reputedly had a strong temper; she lived through the Blitz and worked throughout the war when Britian was on the verge of defeat...I hugely admire Queen Victoria but I think our present Queen has outshone her in so many ways...not least for her example of how to live gracefully at any time of your life.

There is a lot to learn from people who have a great deal of experience...and it doesn’t need to involve a load of moaning and groaning about aches and pains and being ‘old’.
Posted by Christina at 23:19