"If I Ruled the World" 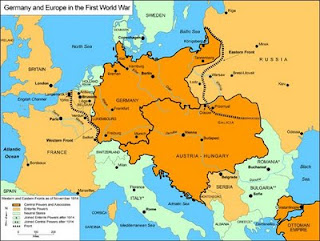 It’s not surprising that the phrase “divide and conquer” is taken from the Latin ‘divide et impera‘ since this age-old practice goes back to the Romans and probably even earlier. If you want to take control of another country, one way of achieving your aim is to rouse discord among the people, divide them and then step into the chaos and take charge. I think this tactic was probably used by the Romans in Palestine/Israel in New Testament times, when Herod the Great’s sons inherited different parts of his kingdom. A more modern example is Bismarck’s incitement of the Magyars, following the Austro-Prussian War, so that they would basically rabble-rouse against their Austrian ‘overlords’ and in so doing would weaken Franz Josef’s Empire. (Alas, all over the world, we see the same strategy being carried out today).

While writing Shattered Crowns: The Scapegoats, so many things struck me as disturbing and having parallels in the long past and in the present. One aspect of the First World War that cannot be overlooked is that in 1914 there were 4 major autocratic powers in Europe (the fourth might be called under another name): Austria-Hungary, Germany, Russia and the Church (in fact 2 Churches: Orthodoxy and Catholicism). If you or I were – as in a game - of a mind to take control of trade, industry, banking and above all the mind-set, beliefs and aspirations of humanity, autocracies would be the first obstacle to be overcome, particularly if those autocracies were built on deep-seated beliefs such as religion. Russia, a deeply spiritual and independent nation wherein Orthodoxy and Tsardom were so intertwined, and Austria-Hungary, the ‘Apostolic Empire’ with its close connections to the Roman Catholic Church, would be the prime targets. By 1914, Austria-Hungary was already disintegrating, but there was a danger that if the elderly Emperor Franz Josef died and his nephew, the forward-thinking Franz Ferdinand, were to succeed him, the Empire, through Franz Ferdinand’s reforms could not only be restored but could also make peace with its neighbours. (Two weeks before Franz Ferdinand’s fatal trip to Sarajevo, he entertained Kaiser Wilhelm at one of his country estates and the two men discussed, among other things, greater co-operation with Russia and the need to create peace in the Balkans.)

By 1918 the autocracies had been wiped out and with them Orthodoxy and Catholicism no longer held any territorial weight in Europe. Those past autocrats could be either wiped out of history (as happened in Soviet Russia) or portrayed quite differently to the reality (that, too, is an old trick – look how Richard III was described by the usurping Tudors! – and so it continued with ‘weak’ Nicholas and ‘mad’ Wilhelm). Society could be first secularised and then ‘dumbed down’, fed a diet of sex and shopping, pleasure-seeking and desperation, ‘action films’ and advertisements. Hey-ho! Now we can brainwash the world and people become mere puppets, repeating the old histories....

The only problem is that if you ever lay concrete flags in a garden and build walls and sanitise everything, little sprouts of green still push between the flags, weeds and flowers flourish in the most unlikely places and Nature continues to show her face no matter how much effort you put in to oppressing her. People will go on fighting wars without meaning and others will go on in their game of control but really the human spirit and the depths of Spirituality, Life and Humanity in all its forms can never be crushed by these games. Sooner or later the Truth always comes out.

Christina, please keep telling us about all these hidden agendas that caused the fall of the three great empires during WWI. I've also heard a few things about these plots to destroy three empires that "coincidentally" where the bastions of the three main branches of Christianity (Catholic Austria, Orthodox Russia and Protestant Germany). All this reminds me to the Lord of the Rings, and I hope the world will find its Frodos, Samwises, Merrys, Pippins and Aragorns. I suspect the Elronds and Gandalfs of this world are somewhere, silently fighting...

PD: I regret to say that I'm closest to Pippin than to Sam or Frodo. I'm terribly unwise and impulsive, not to say not as 1/100 as brave as him. Although Gandalf says that courage can be found in the most unlikely places...

Thank you, Jorge, for your very interesting comment. I am - alas! - not so familiar with the characters of 'Lord of the Rings' but I understand what you are saying and find it fascinating. Perhaps Tolkein even had this in mind when writing his books!
I really appreciate what you have written.