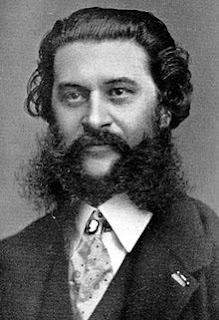 Ninety-seven years ago this evening, Archduke Franz Ferdinand and his wife, Sophie, hosted a banquet for officers and local dignitaries at their hotel in Bosnia. The orchestra of the Sarajevo garrison played for them and I imagine that on a summer evening, the guests were entertained to such beautiful and popular music as Strauss’ Roses from the South and the Emperor Waltz. (Strauss' music being the epitome of Vienna at that time, I put his picture here).
That evening was so perfect for Franz Ferdinand. Someone once said that the three ingredients to happiness are something to enjoy, something to look forward to, and someone to love. In his role as Inspector of the Imperial Army, Franz Ferdinand had just witnessed a successful series of military manoeuvres and, considering that he had often despaired of the state of the Austrian army, that must have come as a great relief to him. He had, only weeks earlier, cultivated a friendship with Kaiser Wilhelm and together they had planned closer co-operation with Russia and the other major powers. More importantly to Franz Ferdinand, he had enjoyed a summer of seeing his wife accepted by the people at the races and at the opera; and he had spent time with his beloved children. He certainly had something to enjoy.
Tomorrow would be his fourteenth wedding anniversary and, perhaps for the first time, he and Sophie would travel together in the same motorcade – no longer would she be relegated to the role of an inferior. What’s more, he would have the chance to explain his views on giving greater autonomy to the different regions of the Empire. His uncle, Emperor Franz Josef, weakened by his recent bout of bronchitis, could not be emperor forever and very soon, it would seem, Franz Ferdinand would be able to implement his own ideas. He had a lot to look forward to.
And Sophie beside him. This woman, for whom he had endured the alienation of his family and the court, and who was probably the only person in his life (apart from their children) who truly understood him, meant more to him than anything. He truly loved her.
Yes, indeed, I imagine Franz Ferdinand was very happy on this night, ninety-seven years ago.

His murder the next day was such a major world event that there hasn’t ever been a history book about the First World War that doesn’t mention him. Even in my ‘O’ level classes and the rather dull text books that described this amazing time, there was a faint photograph of him on that fateful day, and, in the index of the book there was only one reference to him to say he was murdered and consequently war broke out.

His murder and the subsequent slaughter was not, I am sure, merely the work of some tubercular student with notions of nationalism, but rather a well-defined plot in which Princips was only the ‘patsy’. Had this man lived, the history of the 20th Century would have been very different but, since we cannot directly change the past, we can, at least, recognise the true character of a man who – like so many others – had been so maligned or ‘written off’ by historians.

I am so glad that his last evening was spent with his beloved Sophie and that, it seems, he was truly happy that night.
Posted by Christina at 23:10

I enjoyed this article very much! I am also glad that he was so happy.

I don't know very much about Franz Ferdinand so I must find out more about him.