Kaiser Wilhelm - A House of Many Windows

The better I ‘get to know’ Kaiser Wilhelm – whose birthday was 27th January – the more I feel for this man, who has been so reviled by historians. The First World War propaganda really settled into the psyche and to this day he is seen as the mad warmonger, which he never really was, I am sure.

The details of his traumatic birth and the effects of the disability of his arm have been repeated so often that it is hardly worth repeating them but it really must have had such an impact on a small child who, on the one hand was so flattered and manipulated – and basically used as a pawn against his parents - by Bismarck and others, and at the same time was intelligent enough to know that his disability might prove a major obstacle to the image he wished to create. After all, he had heard the whispers that ‘a one-armed man can never be Kaiser...’ and in a typical example of how cruelty breeds cruelty, he himself was later to make a similar statement about his own father when throat cancer rendered him speechless. 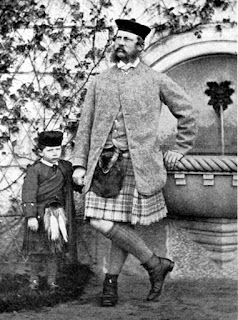 There is no doubt hat he could be cruel. His treatment of his mother, after his father’s death, is a prime example of this – but what goes on in families (his love-hate relationship with his mother), and still more what goes on in human minds can never really be understood by outsiders. His pride, his belligerence and his alleged madness, though, seem to be greatly exaggerated and misunderstood. When he was a small child, his mother wrote that he ‘ is very shy by nature and that often makes him look proud.’ That seems to have been the pattern of his life. His outward appearance, however, contrasted sharply with his obviously low opinion of himself.
He wasn’t always – in fact he was never! – the caricature on the propaganda posters. Again, when he was a child, his mother wrote that he, ‘is a dear, interesting, charming boy – clever, amusing, engaging – it is impossible not to spoil him a little. He is growing so handsome and his large eyes have now and then a dreamy expression and then again they sparkle with fun and delight. He too has his failings; he is inclined to be selfish, domineering and proud, but I must say they, too, are not his own fault as they have been hitherto more encouraged than checked.’ 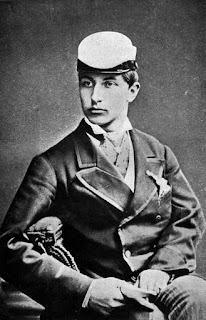 One aspect of his character really stands out for me – his desire to be loved. His disability and the way in which the Prussian court kept him from his mother, seems to have left him with such a sense of insecurity and a longing to be accepted. Like many people, torn between conflicting emotions, he sometimes lashed out – trying to appear the strong man when the little boy inside him was crying to be loved. I think often, when reading more about him, of Robert Louis Stevenson’s lines: “The body is a house of many windows: there we all sit, showing ourselves and crying on the passers-by to come and love us.”
I do not believe for a moment that he wanted war and – as the title the first novel my trilogy shows! – I believe he, along with Tsar Nicholas, was easy prey for those who wished to find a scapegoat on which to blame the subsequent slaughter. Kaiser Wilhelm was a complex man of many shades of character, but he was also capable of great love. His desire to visit his grandmother, Queen Victoria, as she was dying, his interview with the Daily Telegraph in 1908 (which led to such a bizarre furore and contributed to his nervous breakdown), his willingness to rescue to the Russian Imperial family in the midst of the revolution when Germany and Russia were at war, and even his angry tantrums when war broke out, seem to me to bear witness to his capacity to love and his longing for love.
Ultimately, had he not been so manipulated by those around him, he might have shown his true character and would have come down through history very differently...
Posted by Christina at 23:11

I loved your perceptions about Willy- changed my mind.