An Interview With Petra H. Kleinpenning

﻿﻿﻿﻿﻿﻿﻿﻿﻿﻿﻿
While there are many wonderful biographies and novels providing insight into the characters of people from the past, few books provide so deep an insight as collections of original diaries and letters, particularly when those letters are exchanged between close family members. For this reason, the letters between Queen Victoria and her daughters are fascinating and give such a lovely glimpse into her world. Lesser known, however, and so even more fascinating are the letters between Alix – the last Tsarina of Russia – and her brother, ‘Ernie’. Until recently these letters were not widely available but, thanks to Petra H. Kleinpenning's wonderful book - The Correspondence of the Empress Alexandra of Russia with Ernst Ludwig and Eleonore, Grand Duke and Duchess of Hesse. 1878-1916 - we can now discover a great deal more about the life and character of the Empress Alexandra. I am delighted that Ms. Kleinpenning very kindly agreed to be interviewed about her work as I know I am not alone in finding her responses – and, of course, the book itself – truly interesting and enlightening.

Many people have preconceived and erroneous ideas about the character of Tsarina Alexandra, do you think that these letters present her in a different and truer light?

Obviously, a correspondence between two siblings cannot give a complete picture of the lives and characters of the letter writers. The picture that emerges from this correspondence is that of a woman who was indeed shy and religious. However, the letters contain no sign of her alleged religious mania and provide no evidence that Alix strived for influence or was hungry for political power from her first day in Russia. The idea that she was completely under the influence of Grigori Efimovich Rasputin in later years is not confirmed either.

In spite of the perceived opulence of the Russian palaces, the Imperial Family lived very simple lives in simply furnished rooms. Do you think this was a reflection of Alix’s character and her love for her native Darmstadt, and do you think this simplicity comes across in the letters?
In 1895, Alix enthusiastically described the Lower Dacha at Peterhof, one of its assets being that it had attractive nooks and ridges to put photos and trinkets on. And one reason why she liked the Alexander Palace in Tsarskoe Selo was that it was a place where her husband could work in peace and could get fresh air and sufficient exercise to keep fit. The interiors of the private wing of the Alexander Palace included many objects that reminded her of, or came from, Darmstadt. Alix wrote that their bedroom had the same chintz as Ernst Ludwig's bedroom at the New Palace in Darmstadt. In the Palisander Room hung a wedding gift from Darmstadt: a beautiful painting of Romrod Castle by Eugen Bracht. Old photographs of the Palisander Room also show folding screens on which one sees woodcuts of familiar buildings in Hesse. Moreover, the Maple Room was decorated in Jugendstil, of which her brother Ernst Ludwig was a devoted patron in Darmstadt. Opulence seemed immaterial.

Out of all her siblings, would you say that Alix was closest to her brother? Do you feel that this is apparent in the letters?

I think that the age difference between Victoria and Ella on the one hand and Alix on the other was too large for them to develop a truly close relationship. Irene was 'only' six years older, and Alix’s relationship with her seems to have been closer. This was reflected in their correspondence that has been partly preserved in the state archive in Moscow: the cards that Irene sent to Alix were written in a very warm tone. Of all siblings, Ernst Ludwig was the one closest in age to Alix. Generally, he was the typical older brother who assisted her in word and deed, in practical issues as well as in awkward situations. He also livened things up, for instance by taking Alix and some friends to Kranichstein Hunting Lodge for an afternoon of skating on the pond. During her first year in Russia, Alix was quite homesick; Ernst Ludwig would receive one letter a week on average, no matter whether he wrote back or not. Through the years, she sympathized with his marital grief and later his marital bliss. She also showed an interest in his pursuits, from his student days and time in military service to his years of patronage of the arts in Darmstadt. Ernst Ludwig does indeed seem to have been the sibling she was closest to. 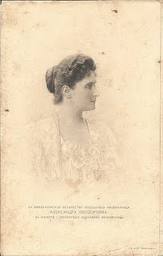 How did you decide which letters to include in this collection? And do you have a favourite letter?

The correspondence of Alix with Ernst Ludwig and his second wife Eleonore has been included in its entirety, apart from one unreadable card. Any selection would just have reflected my personal opinion about the importance of various letters, and I didn’t want to impose my views. Personally, I find the passages in which Alix wrote about her first pregnancy, about the new life developing inside her, very beautiful. A letter that I find very gripping is the one from World War I in which she expressed her grief for her Siberian regiment that had become victim of a horrible gas attack and had been virtually annihilated.
The pictures are also beautiful. Again, how did you decide which to include, and do you have a favourite.

Not surprisingly, the pictures are meant to give an impression of the letters themselves and of the main people and locations mentioned in them. The book contains only a few letters from or to Victoria Melita, Ernst Ludwig’s first wife. To ‘increase her presence’, I have included a photo of little Princess Elisabeth of Hesse with her mother, instead of her father. I also thought it important to put faces to the names of some non-family members who played a role in Alix’s life in Darmstadt, such as her friend Toni Becker, Oberstallmeister Moritz Riedesel zu Eisenbach and Oberhofmeisterin Wilhelmine von Senarclens-Grancy. The colours of the original antique Hanfstaengl reproductions are more attractive, but my favourite pictures are nevertheless the portraits of Tsar Nicholas II, in civilian clothes, his wife and eldest daughters created by F. A. Kaulbach in 1903.
Thank you very much Ms. Kleinpenning!
Posted by Christina at 12:27

I'm looking forward to reading this boo. Many thanks for a lovely interview.

Thank you for commenting, Tess. It is a beautiful book!

I am fascinated by the time period of these letters since I am researching a distant relative who was a portrait artist and became friends w/ Alexandra in these years - 1899 - 1901. She did miniature portraits of the Tsar and Tsarina. This artist was Amalia Kussner (later Amalia Coudert have her 1900 marriage). She also wrote a detailed article of her 1899 visit that was published in Century Magazine (1906). If anyone is interested in the Russian Royal family I encourage you to read that article (which is online is a a few locations for free). I would be very interested in contact information for M. Kleinpenning to see if she found any references to Amalia in her research of these letters. Sincerely, Kathleen Langone, Historial Researcher