It often seems to be presented that as Armistice Day approached in 1918, the Kaiser fled Germany and strolled happily into Holland where his first statement was, ‘and now for a nice English cup of tea.’ In fact, the Kaiser’s departure from Spa and arrival in Holland was anything but pleasant. In spite of Queen Wilhelmina’s hospitality (and later her refusal to extradite him so he could stand trial for war crimes!) he remained for some time under guard in a castle with a double moat – partly for his own protection, and partly because he was initially treated almost like a prisoner.

His son, Crown Prince Wilhelm, described the events of the 9th-10th November very movingly in his memoirs:

Memoirs of the Crown Prince 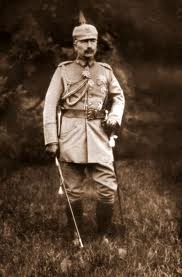 and one of the men who accompanied Wilhelm across the border describes the events of the 10th November:


“I come now to the 10th (November). The night passed quietly but I doubt if a single eye was closed in sleep during its entire course. Soon after 4 a.m. we assembled in the dining car. The Emperor came in apparently self-possessed and calm, gave us all a friendly shake of the hand, as usual. During the breakfast we learned the shameful terms of the armistice. At 5 o'clock a.m. the train started for the Dutch frontier. It had a guard of four soldiers in each car, since it had to pass through places occupied by mutinied troops. Soon ten minutes after we halted at the little station La Reide.
In the darkness, the Emperor left the train and stepped, accompanied by a few gentlemen, into the automobile provided to take him across the Dutch frontier. The rest of us continued in the train. We travelled through Pepinster and Liege and ruined Vise. About 7 a.m. the train stopped. Obliquely across the track was a wire hedge. We had reached the Dutch frontier. As parting greeting the last German sentinel had called after us some coarse words. Our car was uncoupled and we waited for the Dutch engine to take us across the frontier. It came at about 10 o'clock a.m. and drew us into the neutral Kingdom. When we reached the first Dutch station we saw the Emperor, who had preceded us in automobile, walking up and down the platform. In great depression of spirit we presented ourselves before him.


The Dutch Government had been made acquainted with the decision of the Emperor by its Consul in Brussels. The Emperor had also telegraphed to the Queen asking her permission to enter her kingdom as a private gentleman. The Emperor had been received at the frontier by the Dutch Military Commander, Major van Dyl. T he Major looked out for our protection against the public, as the place was filled with hostile Belgian deserters. In the course of the forenoon the German Consul at Maastricht had a number of Dutch officers, both civil and military, presented themselves before the Emperor. We learned that the Queen had placed the Castle Amerongen, property of Count Bentick, at the service of the Emperor. Our departure from the frontier for the Castle was fixed for the next day, the 11th of November.
It was a most depressing, shameful journey. At every station thousands of people were gathered, greeting us with shouting, whistling, cursing. They threatened us, made signs of choking and hanging us, etc. In such manner was our poor Emperor received on Dutch soil.”
Posted by Christina at 14:47