A friend who recently visited Osborne House told me - to my despair! - that the beautiful Swiss Cottage was surrounded by scaffolding as it was in danger of collapsing! I was not sure how true the story was, but the thought of that exquisite piece of history disappearing was most disconcerting! 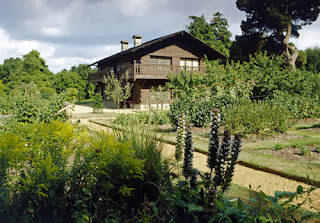 Happily, a restoration programme is underway, and, according to the BBC:

"The £1.65m project to rectify structural issues is due to be completed by next spring.
The Heritage Lottery Fund has contributed £776,400 to the work and the project has also received donations from a number of organisations, including the Garfield Weston Foundation.
The conservation work was needed to rectify issues which had developed in the chalet, including problems with timbers used to support its floors." Read more

There is more information, too, at the English Heritage website.

It is wonderful to see that a century and a half after it was opened, such care is being taken of a national treasure which was so close to the heart of Prince Albert and his children - particularly Alice and Vicky.


Thank you, to all those who have entered the competition to win a paperback copy of Wonderful Walter. The competition will remain open until six p.m. GMT tomorrow, so there is still time to enter, using the contact form on the left hand column of this page.
Posted by Christina at 10:34

Thank you for sharing. As I read your wonderful story of Alice I am charmed by everything that is Osborne and hope to experience it someday.

Thank you, Jayne! Oh, I love Osborne more than anywhere on earth - it is so beautiful, and I hope you are able to go there before too long!

I wish I could tell you how many times I read Beautiful Princess but I lost count!

I am truly honoured that you enjoyed it - thank you :-)