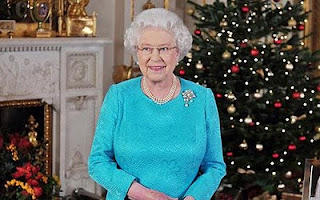 During her Christmas Day broadcast, Her Majesty the Queen - a woman of great wisdom - said, "Each year that passes seems to have its own character. Some leave us with a feeling of satisfaction, others are best forgotten. 2009 was a difficult year for many..."

Looking back at 2009, which began with such high hopes (as does every year) the Queen really captured the spirit of the age! A year, here in England, of seeing more and more coffins draped with Union Flags being brought home from Afghanistan; a year of meaningless words spouted by world leaders; a year of M.P.s' expenses coming to light; a year of shops like Borders and Woolworth's closing - empty shopping Malls and people losing their jobs; a year of more nonsense spouted about the climate change, when Nature responds by sending more snow than we have had in decades!!; a years of more child abuse scandals in Ireland being brought out.

But all is not lost! As Her Majesty said, "Each year that passes seems to have its own character..." and it seems like this one was a year of uncovering the lies that have been allowed to remain hidden and have been festering in the manner of, to quote Shakespeare, "something is rotten in the state of...." how things have been. If one wishes to re-decorate a house, it's not advisable to paint over cracks, it is better to strip the whole room and expose the rottenness as only then can it be remedied. A boil sometimes needs to be lanced in order to heal. This year seems to have been a year for lancing boils and for people to be able to say, "Things have gone on in a dark way for long enough; now is the time to expose the shadow side in order to heal it."

The most wonderful story of the year, for me, is Susan Boyle's. What a whirlwind of success for someone thoroughly without guile! After the 'plastic age', where every actor looks the same as the next, it feels as though Nature is regurgitating the nonsense we have swallowed for so long. It feels like a pivotal time of changing direction. As more and more people move to growing their own vegetables again, and finding alternative ways of earning a living than by fitting into someone else's idea of how we must live, as people turn from the idea of advertising designs for how everyone must look in order to be successful, maybe it really is a sign that 2009 will be looked back on as the year of exposure of falsehood, of lancing the boils and of making a small turning point on the road to recovering who we really are and how we might live in harmony, being who we are here to be.

(picture taken from The Telegraph website. If you object, I'll remove it :-) )
Posted by Christina at 23:04