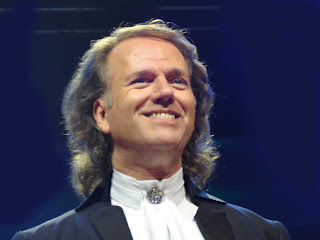 The Royal Variety Performance, which took place a couple of weeks ago, was broadcast this evening and, alongside the brilliant northern humour of Peter Kaye, and the brilliance of a ventriloquist and some gymnasts, it featured André Rieu and the Johann Strauss Orchestra. What a beautiful return to the age of elegance and beauty!

It irked me a little - as a northerner - that all the comedians (and these were mostly northern comedians) made such a big thing of the north-south divide, rather playing on the idea that all northerners are beer-swilling, uncouth people with no command of the English language. When Whoopi Goldberg then appeared and played on the same kind of divisive theme about how wonderful it is to have a 'black' president and a black princess in the latest Disney film, it seemed as though a lot of old 'chips on shoulders' came into play, rather than people being accepted for what we are.

As a northerner, I find it offensive to be classed in some particular vein - I have the northern accent but I don't have a whippet, a flat cap and have never been down 't' pit, nor do I eat black pudding. I don't like the way that we play on being northern as though it matters where we come from. And, if I were a black person, I would find it equally offensive if someone kept saying how great it is to have a black president. Who cares what colour someone's skin is? It's what he/she says that matters. There are some literary awards open only to women - and, as a woman, I find them objectionable as I find awards open only to people of ethnic minorities objectionable. It often seems that people who speak most vociferously about equality, are those with the largest chips on their shoulders. We are all just people!! Who cares where we come from, what colour or gender we are? The ones who speak in the loudest voices, seem to have the biggest hang-ups about these things and create the widest divides.

However, in the middle of all that, there stepped onto the stage the wonderful Johann Strauss Orchestra - what a beautiful journey back into that age of glittering ballrooms and refinement! The musicians all smiled at one another throughout their performance and it was utterly beautiful! Thank you, Mr. Rieu (I found your image on Google and have posted it here!).
Posted by Christina at 23:48