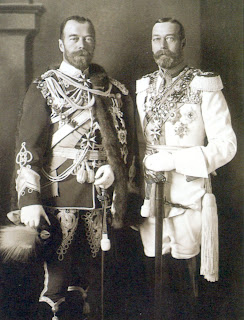 "Some are born great, some achieve greatness and some have greatness thrust upon them" wrote Shakespeare in 'Twelfth Night'.

The major front-of-house players on the world stage in 1914 were mostly those who had greatness thrust upon them. Franz Josef became Emperor of Austria in 1848, at the age of 18, due to the mental difficulties of his uncle and predecessor. Nicholas - at 26 - became Tsar of Russia in 1894 due to the untimely death of his father. George of Great Britain became king due to the premature death of his brother, Albert Victor; and Wilhelm II became Kaiser due to his father's throat cancer. With the exception of Wilhelm (who was busy working out the problems of his malformed arm and difficulties with his relationship with his mother) none of these men actively sought power but became the front men for the biggest disaster in history. Behind them, of course, were the same unseen 'dark forces' that continue to this day - the forces of those who 'achieve' greatness, or rather snatch at an idea of 'greatness' and power through sheer arrogance.

Across Europe in the years leading up to 1914, there was a restlessness - women were no longer content to remain disenfranchised; the industrial revolution had led people from their more natural way of life to living by the clock in slum dwellings and that couldn't continue; the population had increased and people were suddenly being herded into jobs which crushed their spirit by unscrupulous factory owners. In such a state of unhappiness, the idea was born that the king/Tsar/Kaiser was responsible for all of this dissatisfaction but in fact it was nothing to do with any of these men all of whom (excepting, perhaps, George of Britain) were victims of their greatness.

Of these 4 kings, the one who has received the greatest criticism is Nicholas, Tsar of All the Russias. So often he has been written off by historians as 'weak' but this is such a glib comment that is merely folk lore. Nicholas went out of his way to avoid the catastrophe of war. He was battling not only against those 'dark forces' of industrialists and bankers who had already decided that war was the best way to acquire wealth, but also against the rising tide of change within his own Empire. When push came to shove, George was most cowardly, in my opinion. Changing his name to Windsor to sound more English, he abandoned his close ally, cousin and friend, Nicholas to save his own skin. Franz Josef, having endured the dramatically tragic deaths of his brother, son and wife, gave up the fight and passed on. Wilhelm, I think, tried to make amends by offering safe haven to his 'enemy' Russian cousins, then fled to Holland but he was already powerless because his ministers had taken over. Nicholas, however, stood by his army, abdicated so as not to turn his army on his own people and suffered the indignity and humiliation of abdicating so as not to be unfaithful to his allies. Of the 4 of them, who behaved with the greatest courage right to the end? The 'weak' Nicholas!

Who came next in these countries? Power seeking psychopaths like Lenin (riddled with syphilis), Stalin (mass murderer), Hitler...massive propaganda machines...and what is happening today in the way of propaganda?