In loving memory of beautiful Prince Albert who died on 14th December 1861 aged only 42. In his relatively short life he had achieved so much - a great artist, composer and musician, he restored the tarnished image of the monarchy in Britain and was passionate about the welfare of the people. Far-sighted in ensuring an excellent education for his daughters as well as his sons, he was a deeply loving father and a true role model...and incredibly handsome too!! 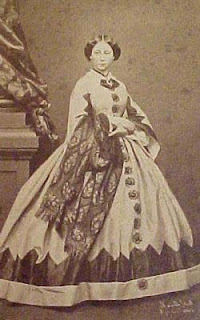 And in loving memory of his daughter, Princess Alice, who, after wearing herself out caring for her family and the people of Hesse, died aged only 35 on 14th December 1878. Like her father, Alice had a profound social conscience and a deep, questioning spirituality. It is significant and beautiful that her last words were, "Dear Papa..."
Posted by Christina at 10:18