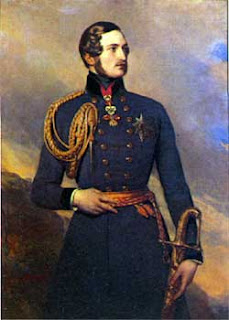 About depths of feeling, it's so clear that so much of what passes for 'passion' nowadays misses the mark completely. There was a time in film and music where much was left hidden and had an air of mystery about it. Nowadays 'anything goes' but it isn't passion and lacks depth. Most fascinating of all is the fact that the some of the people who are often described as 'cold' or viewed as remote are often those with the greatest depths of passion and feeling.

To cite but 3 examples: Prince Albert, Grand Duchess Elizabeth and Emily Bronte. Apart from being the love of Queen Victoria's life, Prince Albert is often seen as the epitome of Victorian coldness, yet here was a man who inspired not only the love of so passionate a woman, but also wrote music and painted with such depths of feeling. He died at only 42 and I think that had a lot to do with the power of his unexpressed feelings. Being the child of an unhappy marriage, he learned to hide his feelings at an early age but, looking at his art, his music, his social conscience, his devotion to his family, he was one of the most intensely passionate men ever to have lived.

Because she didn't have children and was married to someone who is often maligned, Grand Duchess Elizabeth is also often described as 'cold'. Her letters - filled with exclamation marks and dramatic expressions of endearment and passion - reveal a very different personality! Emily Bronte, because she longed always to be alone, is seen as another 'cold' person and yet she wrote the most passionate novel, and still more the most wonderful poetry of her century.

In an age where blatant and rather boring displays of short-lived sexuality passes for passion, it's small wonder that such people who were so 'whole' in their passion are dismissed as 'cold'. But, as Wordsworth rather clumsily wrote: "To me, the meanest flower the blows can give thoughts that lie too deep for human tears..." I often think that those with the deepest sensitivities, do not wear their hearts on their sleeves because they know that it would not be understood in a rather dispassionate world.

Perhaps it's not that people no longer have these sensibilities - it's that the most powerful feelings are frightening to most people and those who feel them most deeply feel it is better to remain silent about them.
Posted by Christina at 23:38