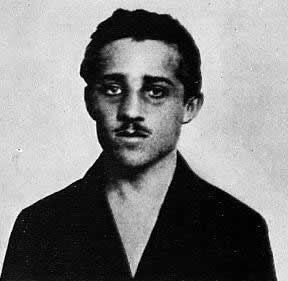 July 28th, one month after the murder of Franz Ferdinand and Sophie, the Austrian ministers sent the ultimatum to Serbia which would precipitate war on a scale no one could have imagined. Gavril Princip, (ironically translated as 'prince'!!) the young consumptive terrorist who killed the Archduke, must have been sitting in his cell and wondering what he had been drawn into and what he had started. A mere pawn in a game, or a person whose name was written into the history books, the poor, silly lad must have really felt nothing but despair at having been so inflamed by some inner anger that he fired point blank at an innocent man and woman and those 2 bullets were to lead to the mindless slaughter of millions...a whole generation.

However, Princip wasn't a cold calculated killer. He was an opportunist and his opportunity came when he least expected it by the fluke of Franz Ferdinand's car reversing in front of him as he left the sandwich shop. (Brings to mind Auden's poem: Musee des Beaux Arts:

About suffering they were never wrong,
The Old Masters; how well, they understood
Its human position; how it takes place
While someone else is eating or opening a window or just walking dully along;
How, when the aged are reverently, passionately waiting
For the miraculous birth, there always must be
Children who did not specially want it to happen, skating
On a pond at the edge of the wood:
They never forgot
That even the dreadful martyrdom must run its course
Anyhow in a corner, some untidy spot
Where the dogs go on with their doggy life and the torturer's horse
Scratches its innocent behind on a tree.

In Breughel's Icarus, for instance: how everything turns away
Quite leisurely from the disaster; the ploughman may
Have heard the splash, the forsaken cry,
But for him it was not an important failure; the sun shone
As it had to on the white legs disappearing into the green
Water; and the expensive delicate ship that must have seen
Something amazing, a boy falling out of the sky,
had somewhere to get to and sailed calmly on

Behind him, were the calculated killers who issued the ultimatum. They had a month to consider their response to the murder of a man they hated: Archduke Franz Ferdinand. Within that month, they waited until the French President had left Russia so he couldn't confer with Tsar Nicholas, and until Kaiser Wilhelm had set off for his holiday on the Norwegian fjords, while their own Emperor was away at his summer residence.

If they had only known what they were letting themselves in for....Where are they now, those people who wanted war to bring themselves glory? Most people today don't even remember their names any more than we remember the names of the countless millions who died on battlefields.
Poor Princip, what an unlikely candidate for such a burden....
Posted by Christina at 23:16