Who Had the Most to Gain? 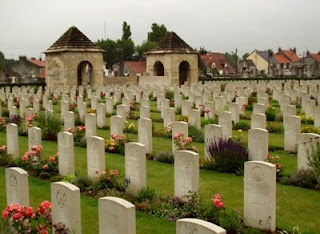 With the beautifully respectful and desperately tragic story of the new cemetery at Fromelles, comes the century-old question of 'what was it for?'
The Second World War - on the surface at least - seemed to have a genuine cause for which so many gave their lives, but the First World War? The more I study it, the more I wonder if anyone knew what he was fighting for, all of which begs the questions: who wanted that war and why? 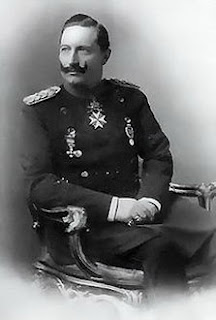 As a small child I sat on my grandmother's knee as she sang (untunefully) songs of the era and told me stories of all the people she had known who were killed there (happy scenario for a small child??). Everyone explained what had happened but no one said why. It was the Kaiser's fault. It was 'for England' and 'for our freedom'. Was it heck! The Kaiser, I am absolutely certain, had no desire for war. He, who held his dying grandmother (Queen Victoria) in his arms had a love-hate relationship with Britain and a desire to appear 'strong' to Cousin Nicky in Russia, was a loyal German, wanting the best for his country - which hadn't known any war since Unification and was thriving. Why would he want war? He didn't.

Nicholas, in Russia, far from being the 'weak' or unintelligent Tsar of popular imagination, worked overtime to prevent a recurrence of the Balkan Wars with a brilliant understanding of psychology (note his suggestions for a Bulgarian settlement after the Bulgarians' routing in the Second Balkan War) and what was best for his own country. He ordered 12 or 14 days mourning for Franz Ferdinand and then worked day and night to achieve a peaceful solution to the 'July Crisis' of 1914. 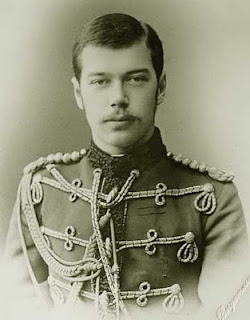 Franz Ferdinand, whose death was the catalyst to the tragedy, wanted to create an American-style government in Austria-Hungary, giving a kind of autonomy to each of the states within the Empire. His trip to Sarajevo was, I think, part of that plan - to hand power back to people.

None of the kings had any desire for war. They were friends, relations; they attended the same functions, met occasionally, lived the same way of life and every single one of them wanted the best for their people.

How many soldiers went to war because their landowner or his son went first? That doesn't show that the people were forced into something against their will; it shows rather the amount of respect they had for caring employers. Here's another lie - the generals and officers stayed safely behind the scenes while the ordinary soldiers went to their deaths. 78 British Generals were killed in World War I and countless officers, most of whom were first out of the trench, armed with only pistols against machine gun fire.

So who wanted war? Well...obviously, there were the power-seekers and the hot-heads most of whom posed (and continue to pose) as 'socialists' who have the welfare of the people at heart but really are seeking only their own gain. In Austria, there was Berchtold and Conrad. Behind them, stood the bankers and economists for whom war is always profitable, and behind them is the whole mass of people who are happy to be led without thinking for themselves.