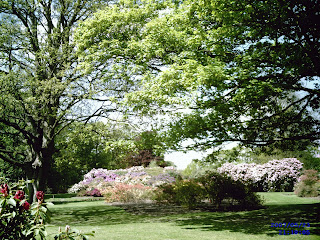 It's the 'silly season' in England. As soon as we have a glimpse of the sun for more than a couple of days in a row, the news changes and people change. Now, because the sun appears, we turn into children again - and how lovely is that! Politics fades and 'Paul the Psychic Octopus' appears on the news. We were kind of hoping that our team would do well in the World Cup, but we're used to that hope fading sooner rather than later, that we simply switch to sun-worship again.

The effect of the Nature is constantly apparent. (It always seemed like the Romans, coming from sunny Italy, were rather reluctant to conquer these shores and dark climes, and the further north they moved, the less successful they were - hence, they never made any headway in Scotland). How the weather affects nations is a constant source of fascination. Remember that hot summer of 1914 when, in the middle of a Bank Holiday in August, the people suddenly felt a sense of bravado and everyone enlisted to 'crush the Hun'? Had that happened in November or February, I really doubt that the response would have been so vigorous! The same was true all over Europe - in Berlin, in St. Petersburg and Paris....a hot summer's night when people felt they could take on the world...the silly season turned sour.

Having recently watched Andrew Marr's utterly brilliant "Making of Modern Britain" again, it is endlessly absorbing how easily people slip into the expected patterns. I am most intrigued by Lloyd George (whom, despite my ancient relatives telling me how wonderful he was because he introduced pensions, I never trusted (see his treatment of the suffragettes and his self-serving ambition) ) and the way the 'big government' came about through him. Little boys playing their games are always a bit suspect.

I think, perhaps, the silly season is the very best time of year because it's the one time that people think for themselves, turn their noses up to the idea that politics and politicians are necessary, and we all simply live and smile and be pleasant and life is lived as it's meant to be lived.
Posted by Christina at 23:25