Queen Victoria as a Grandmother 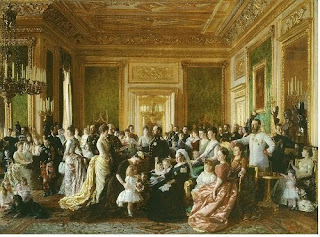 On 6th July 1868, when told of the birth of her seventh granddaughter, Queen Victoria remarked that the news was ‘a very uninteresting thing for it seems to me to go on like the rabbits in Windsor Park.’ Her apathy was understandable - this was her fourteenth grandchild, and over the next two decades twenty-six more would be born. Though the Queen herself had given birth to nine children she had never been fond of babies, viewing them as ‘frog-like’ and ‘rather disgusting…particularly when undressed.’ The early years of her marriage had, she claimed, been ruined by frequent pregnancies; and large families were unnecessary for wealthy people since the children would grow up with nothing worthwhile to do.

Nevertheless, her initial reaction to the birth of Princess Victoria of Wales belied the genuine concern that Queen Victoria felt for each of her twenty-two granddaughters. ‘As a rule,’ she wrote, ‘I like girls best,’ and for the rest of her life she devoted a great deal of time to their well-being and happiness, showering them with an affection she had seldom shown her own children. Though at times she found them too big, too noisy, too boisterous or too ill mannered, she was ever on hand to offer support and to welcome them into her homes. No matter how pressing affairs of state, she never missed their birthdays and was always available when they were in need. When one was in labour the Queen was quickly at her side, holding her hand and mopping her brow; when one’s marriage failed or another’s love was unrequited, the Queen held her as she wept. She felt deeply for their troubles, sympathised with their sorrows and worried about their futures. Even when they exasperated her by ignoring her advice, she was quick to forgive them. She missed them when they were far away and took offence if they did not accept her invitations to Osborne, Balmoral, or Windsor. The truth was that, almost in spite of herself, she loved them deeply: “They are like my own children;” she wrote to the Earl of Fife, “their happiness is very near my own heart."

The twenty-two princesses were raised in eight separate family groups - the Hohenzollerns, the Waleses, the Hessians, the Edinburghs, the Christians, the Connaughts, the Albanys, and the Battenbergs - and their lives and personalities were as varied as their names. Some lived and died in virtual obscurity, others played a major role in world events. Some were pale and sickly, others robust and energetic; some strikingly beautiful, others tragically plain. Several met with appalling violence and tragedy, while others enjoyed the carefree lives of wealthy Victorian women. They grew up as far apart as England, Germany, Malta, and India, sometimes amid great wealth, other times struggling to maintain royal standards. Twenty-seven years passed between the birth of the first and the birth of the last, but they shared the common bond of being shaped by their English grandmother, whose influence was apparent even in their names. The Queen often expressed the hope that all her grandchildren would be called after her or their grandfather, Prince Albert, resulting in seven Victorias, while the majority of the rest had Victoria or Alberta somewhere in their litany of names.

By 1914, through a series of dynastic marriages, the Queen’s granddaughters included the Empress of Russia, the Queens of Spain, Greece and Norway, and the Crown Princesses of Roumania and Sweden. As their brothers and cousins occupied the thrones of Germany, Britain and Denmark, Prince Albert’s dream of a peaceful Europe created through bonds of kinship seemed a real possibility.

“All our cousins,” wrote Princess Marie Louise of Schleswig-Holstein, “were more like brothers and sisters than mere blood relations.”

Yet in little more than a decade after Queen Victoria’s death, the Prince Consort’s dream would lie shattered in the carnage of the First World War. Royal cousins and even siblings would find themselves on opposing sides; two of them would die horrifically at the hands of revolutionaries and several others would be ousted from their thrones. They had lived through the halcyon days of European monarchies but their lives, like the lives of millions of their subjects, would be changed forever by the catastrophe played out on the battlefields of France.

Through all the upheavals, tragedies and conflicts one person had bound them together and, even when wars had divided their nations, to the end of their lives, they would look back and remember ‘dearest grandmama’ with love.
Posted by Christina at 23:36

Thanks to the wonderful world of Google I've found your blog! I'm researching for a book that I'm writing and was curious to know the difference between a Grand Duchess and a Duchess would be.

My MC is a Duchess and I'm wondering if that's possible even though her parents and grandmother didn't have such a title. Or did they? If you can help any on that I would appreciate it!

I'm very intrigued by your blog and I love what I've learned so far! You are welcome to drop by my blog and respond or leave an email for me at jenniferdaiker(at)gmail(dot)com

Thank you for your interesting and kind comment, Jen.

I have replied fully via email. Hope it reaches you.