"The Mind Is Its Own Place" 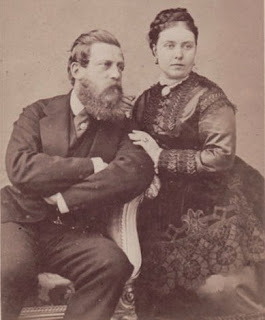 John Milton's wonderful line from ‘Paradise Lost’ : “The mind is its own place and of itself can make a heaven of Hell or a hell of Heaven” came to mind when I read a very interesting comment by ‘Anonymous’ on a previous post. Referring to Kaiser Wilhelm, s/he wrote:

“His parents were a happy marriage, so I don't know why he became such a complicated character. On the other hand, Emperor Karl grew up in a broken home, his father being an unfaithful husband and his mother a very strict and monotonous woman. That clearly shows that it's up to every person to decide what kind of human being she or he wants to become in life.”
I couldn’t agree more with the last sentence of this comment. Recently I was watching a TV drama in which someone, from the outside, had everything going for him but he was deeply unhappy due to his perception of, and emotional response to the events happening with other members of this family, which – inaccurately as it happened – left him feeling somehow unloved. Children see the world revolving around themselves. If parents are unhappy together, children often believe themselves to be the cause of their unhappiness. If, for some valid reason, which the child does not understand, parents leave the child with other people for a while, the child can feel abandoned. Children are so finely tuned that the slightest snub can seem like a disaster, and the tiniest observation can create immense awe and joy. Most of us dull that fine tuning as we grow up – and we are encouraged to do so by adults - in order to dull our extremes of painful or rapturous emotion. Whether we grow up in idyllic domestic circumstances (did anyone grow up in a thoroughly idyllic home where everything was always rosy?) or in very unhappy circumstances, it seems to me we have a choice. We can either become reactors/victims or creative and perceptive beings. How wonderful it would be to maintain a child’s fine-tuning alongside the wisdom that comes with understanding that, while we truly are the centres of our own universe (in that we have choice how to perceive every encounter and situation), everyone else around us is also the centre of his/her universe.

Kaiser Wilhelm, I think, had a reactor/victim mentality and was in such inner turmoil because he knew he needn’t be that way but couldn’t find a means of overcoming his own demons. The fact of his parents’ happy marriage probably added to his woes. His mother was little more than a child when he was born and she had very little say in his upbringing. Being so young and being a stranger in a foreign country and in a Court that was so different to the one in which she was raised, she felt powerless to influence Wilhelm when he was, almost from the moment of his birth, made the property of the Prussian Court, and had his head filled with grandiose notions from Bismarck and from his paternal grandparents. At the same time, because of the deformity of his arm, he was forced to endure countless hours of humiliation and painful treatments in a futile attempt to correct the deformity. A small child, seeing the love his parents had for each other, yet feeling excluded from that love, he always seems to view his deformity as the cause of his mother’s abandonment of him. To make matters worse, his mother was intellectually brilliant, and didn’t really ‘suffer fools gladly’ – after all, her own mother had been very quick to criticise her children so that was the normal pattern for Vicky. Wilhelm must have felt one minute stupid and weak, and the next minute, hearing Bismarck speak of his role as future Kaiser, amazingly powerful. It was a pattern he continued to act out all his life – swinging between victor and victim to such extremes.

At the outbreak of war, for example, his initial response to the Russian mobilisation was that of a victim. The Willy-Nicky telegrams and his own autobiography show him in an attitude of injured innocence – the poor victim of his family’s treachery. Within a week he was making grandiose and extreme announcements about how he would utterly decimate every British soldier who set foot on the Continent, and how every Russian prisoner should be killed without mercy. Who or what was he really railing against? His own sense of confusion and inadequacy.

The saddest part of his story is, I think, that he was intellectually gifted and he was capable of great love but his inner turmoil prevented him from ever finding balance or harmony within himself. The last video footage of his life shows him at Doorn, carving wood, playing with his dogs, behaving as he probably behaved in the happy hours he spent with his mother and family at Bornstedt (the country ‘farm’ his parents bought to create as normal a family life as possible for their children. There, he had played with local children and lived a ‘normal’ life and felt very close to his mother).

The contradictions in his character are fascinating, and are also a family trait. Few people could be as contradictory as Queen Victoria and several of her children and grandchildren...and perhaps the contradictions, magnified by the loftiness of their position, are what make these people so attractive even today. They mirror everyone’s contradictions in a way that is quite beautiful.

There is so much more to write of Wilhelm’s contradictions...
Posted by Christina at 23:03

Thank you so much for this, Christina. I begin to understand the Kaiser a little bit more. I've been reading Victor Hugo's Les Miserables and it has made me meditate about how wrong actions made by people who are emotionally and spiritually hurt are not always their entirely personal fault, but also of those who surround them (families, friends, teachers, society, etc). I will sound idealistic and naive, but definitely this world needs much more love, tolerance and understanding to others, while still keeping a clear vision of what's right and wrong.
Thanks again Christina for your wonderful post!

BTW, I always post as Anonymous, but my name is Jorge. I'll try to remember signing my messages.

Thank you, Jorge, for your kind and lovely comment. I LOVE 'Les Miserables' - isn't it filled with understanding?
I agree that the world needs more love, tolerance and understanding, and I also think that we cannot achieve this until we first learn to love and understand ourselves. Isn't it a fact that those who have caused the most havoc through history, have always been dealing with their own inner demons and trying to assuage them through controlling others?
I agree, too, that we are all to some extent moulded by our upbringing and I think the most important task is to find our way back to our true selves because only when we understand ourselves can we begin to understand others, and then we have no need to attempt to control, hurt or criticise them...Well, that's what I think, anyway :-)

Thank you again for your lovely comment (and for your name :-) ).

Les Miserables has helped me to understand more how important is to be humble and simple, and how a word of sincere affection and understanding can change someone's life, like with Bishop Myriel and Jean Valjean.
It's when we are proud that all our real problems begin. If we could all realize that we're not better than the rest and that sometimes we are even worst I think many iniquities would be prevented. And this is related with what you said, because knowing our weaknesses is part of the process of knowing ourselves, our limits. Only when we know that we can truly advance in life, we can become more fulfilled human beings. That's the lesson I learned last year and the one I'm continuing to learn now. I hope it's not to late.

The way that the Bishop changes Valjean’s life is so beautiful, isn’t it? And then, thanks to one act of kindness and the recognition that he is more than he appears to be, Valjean goes on to change so many lives.

Sometimes I think we spend far too much time being aware of our weaknesses and true humility means also recognising how amazing we are – how amazing we all are! “You are the light of the world....”, “You are the salt of the earth...” “Every hair on your head has been counted...” I can’t imagine any parent would like to see their child grovel like a worm in the dust. I can see how a parent rejoices when a child feels worthy and loved and wonderful. I cannot imagine a parent who would want a child to come each day with a list of mistakes or sins. I can see parents loving to see their children’s smiles and watching them come to them with stories of their joys and successes. To me, it seems the same with the relationship between the loving Creator/Source of everything and who we all are...

I am also sure it is never ‘too late’ for anything.

I really appreciate your comments, Jorge – thank you!

Thanks for this interesting post Christina! I think of Kaiser William as an intriguing character. He was almost always been accused of being the person who led Germany and the whole Europe to war. But I thought of him as a very sensitive and lonely person, who longed to
be loved and understood. His great love for his cousin Ella is also quite interesting for me. Having a mercurial and exuberant character, it amazes me that everytime he's with her, he'd remain quiet and still, and he can be the perfect gentleman. He has a very complex character, I must say!

Thank you, Gem. I so agree with you - he really did long to be loved and understood!