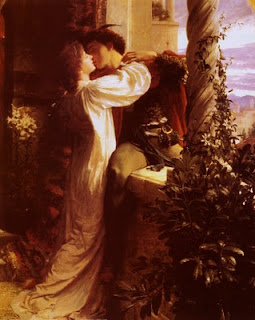 Shakespeare’s ‘Romeo & Juliet’ is often seen as the ultimate love story but I think it is really about something far less romantic and far more cynical than the tragedy of two young and star-crossed lovers. From the earliest scenes, Juliet makes references to death, and while that is often taken as a sexual euphemism, I think it can be taken literally as physical death. An overriding theme of the play is that this love cannot last. It must burn out quickly and passionately or Romeo and Juliet will become as unloving as their parents are. There is no romance between the older Montagues and Capulets – they merely tolerate each other. Shakespeare returns to the same theme in ‘Antony & Cleopatra’. These lovers are older but their romance emasculates Antony and makes him look feeble because, in Shakespeare’s mind, love seems to belong to the young.

Obviously, though loth to spoil so beautiful a story, with such beautiful language (and I love Shakespeare!!), Romeo and Juliet hardly love each other at all. I do believe in love at first sight, but it’s a strange thing that Romeo and Juliet meet 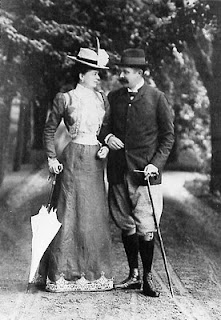 only a couple of times at a distance, marry quickly, spend one night together and then are separated (why didn’t Juliet run away with Romeo when he fled Verona?) so they hardly know each other at all. Both, though, are in love with the dream of love (after all, at the opening of the play, Romeo is mouching about in love with someone else) and since it is a dream that they love, not each other, they have to wake up...or die to keep their dream alive. 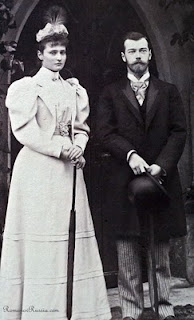 Alas, Shakespeare did not live to see 2 couples who really were star-crossed lovers, and who kept that romance and beauty alive through many tribulations, and ultimately died together. Franz Ferdinand and Sophie Chotek, and Tsar Nicholas II and Alix of Hesse, were true romantic heroes in my opinion. Not only did they have to overcome many hurdles in order to be together (Sophie, a lady-in-waiting, being deemed unworthy of an Archduke; Alix for so long unable to agree to convert to Orthodoxy and having to overcome opposition from her grandmother and future mother-in-law) but once married they had many more difficulties to overcome. These people loved one another, not the dream of being in love, and, as can been seen particularly in the later letters of Alix and Nicholas (during their separation during the war), they remained passionate about each other.

It almost seems fitting that they should die together; I cannot imagine either Alix or Nicholas outliving the other; nor can I imagine Franz Ferdinand without Sophie’s calming influence. So on Valentine’s day, I wish that Shakespeare had lived to write their stories and to show that love does not belong to the young; rather it deepens with age and can last until death....and beyond.
Posted by Christina at 19:03

I wonder if Romeo and Juliet are just desperate, rather than truly in love. (Like you, I doubt that this is the archetypal great love story). Both are probably wearied and sickened by the endless feuding between their families, and perhaps simply want to put an end to it all. Juliet may jump into "love" and marriage because it seems hopeful, life-affirming, a fresh start, a way out. And I wonder if Romeo, by contrast, actually has a secret desire for death, brought on by the despair (and possibly guilt?) caused by the cycle of feuding. At any rate, he seems to be a mournful personality, and to court danger-by courting daughters of the enemy family. (I believe Juliet is not the first one he has sought out- wasn't Romeo attracted to her cousin Rosalind in the beginning?) Just speculation, but I wonder.

Thank you for your interesting comment, Matterhorn. I hadn't really considered Romeo's courting of danger and his death-wish; had rather seen that in Juliet's personality. You have given me a new perspective!