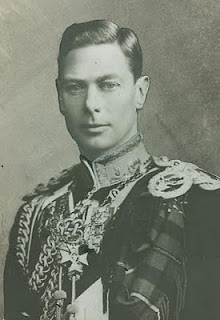 (This site is still waiting to be spring cleaned...please bear with me if it goes a little wonky for a while)

Last week, in the wake of the deserved success of “The King’s Speech”, Channel 4 presented a moving documentary entitled “The Real King’s Speech” which added more background to the film. It included original footage of George VI making various speeches, and alongside that way in which these were presented by the BBC (some of them doctored to make the speech more fluent), the original with all its pauses and hesitations. The close-ups of the King’s face, the movement of his lips and the muscles in his throat as he attempted what was for him ‘hell’ (his word for it) as he worked on overcoming his stammer and speech impediment were incredibly moving. Several things came to mind.

Firstly, the original assessment in the notes of his therapist mentioned the total lack of diaphragm movement and the virtual ‘idleness’ of the solar plexus. The solar plexus has long been seen as the centre of self-awareness/self-worth (isn’t it amazing how, when you are humiliated you feel it physically in your gut?) and it is small wonder that poor George VI had such self-worth issues when you consider the horrors of his childhood: being forced into leg-splints, having his hand tied behind him because he was left-handed (as a left-handed person myself, I cannot think of anything more bizarre than that kind of treatment and hurrah that his great-grandson, Prince William, is left-handed and no one thinks anything of it!) and having such a bully of a father who yelled at him constantly!

Secondly, it is interesting that King George’s courage was recognised during his lifetime and is even more highly regarded now. The immense strength of character it took for a desperately shy man with a speech impediment to accept the throne for which he was unprepared cannot be underestimated. It is said that when he realised his brother had abdicated, he sobbed for an hour at the realisation of what responsibility he must now shoulder. For a man to be so afraid and yet to take that responsibility, it requires enormous moral courage and George VI demonstrated that courage.

And yet....Nicholas II...The Tsar did not stammer but he, too, had felt overwhelmed by a powerful father and was suddenly saddled with an empire for which he, at only 26 years old, was suddenly responsible. Not only was he coming to terms with father’s death, but also realising the enormous task ahead of him, when he cried on his cousin’s shoulders, that did not feel ready for such responsibility. George VI is, quite rightly, regarded as heroic for his moral courage. Nicholas, however, facing an even greater task, is regarded as weak. I think they were both very brave men who, at great personal cost, did not shirk responsibility. I wish that Nicholas would also be generally described as courageous.

On a lighter note I have a bizarre question! At balls, when ladies often had dance 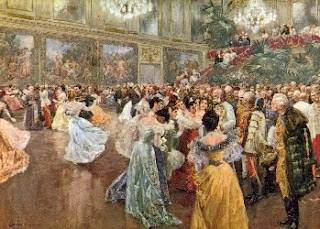 cards attached to their wrists on which they could ‘book’ who would partner them for which dance, how did the men remember on whose cards their names were written and how did they make sure they didn’t double-book themselves? Did they have secret notebooks stashed in their pockets or did they have to remember exactly what they had already arranged?
Posted by Christina at 22:34