"For Those in Peril on the Sea" 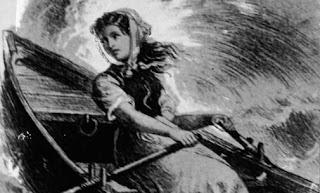 On the anniversary of the sinking of Titanic, the courage of those who daily risk their lives to save others ‘in peril on the seas’ comes to mind. The work of the Royal National Lifeboat Association is truly awe-inspiring since most of the brave people who man the lifeboats are volunteers who turn out in all conditions at the drop of a hat when someone is in distress. It’s a definite reminder that, in spite of what the newspapers and TV broadcasters would have us believe, the world is filled with noble people who are willing to risk even their own lives for others.

One of the least likely English heroines, Grace Darling (whose name always appeared in my childhood history books about great heroes and heroines of the past), embodies that wonderful spirit of humanity that still thrives today. Grace was the daughter of the lighthouse keeper in Northumberland who, one stormy night in September 1838, spotted a wreck from the window of the lighthouse on the Farne Islands. Since the sea was too rough for the lifeboat to be launched, she and her father set out in a rowing boat to rescue the survivors. Her story was brought to the attention of Queen Victoria who was so impressed by her courage that she gave her £50, which must have been a large sum of money in the days when a servant earned less than £20 a year!

I believe that the spirit of Grace Darling and all the other true heroes and heroines of history is still strong today in the Mountain Rescue teams, the Lifeboat teams and all the people who, almost without thinking, automatically perform acts of great courage when they see someone else in need. It’s a natural human response to immediately go to the help of others in need and we are surrounded by heroes and heroines. 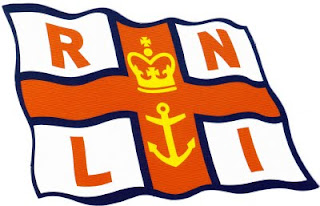 Unfortunately we are too often presented with only the dark side of our society: images of war, cruelty, animal abuse, child abuse murder and selfishness. I firmly believe that if the news concentrated more on the noble, the beautiful and the courageous, we would not only see ourselves in a different light, but we would all become better for it.
Posted by Christina at 23:01