"I wonder what the [future] king is doing tonight...." 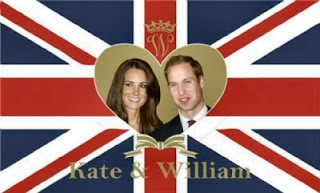 Except when it comes to Royal events! And wow! Has this wedding captured the nation...and we do this so well!! Please forgive a little Englishness/Britishness tonight but of all the royal occasions in my lifetime (the Queen’s Silver and Golden Jubilees and the wedding of Prince Charles and Diana), tomorrow seems to not only continue a link in a chain dating back to the processions of the Victorian era, but also to have created something quite new.

Seeing children Maypole dancing in red, white and blue; the shops bedecked with bunting, and the people who camp out all night for a glimpse of the procession, the historical link is so apparent. It could be any celebration from any era when royal visits and occasions were celebrated. My grandmother spoke of King Edward VII coming to Leeds in 1908 and what she, as a schoolchild, did was no different from what children in schools all over Britain have been doing today. The new part, however, is that I don’t think that (in my lifetime) there has been a royalty who inspired such sincere and genuine affection as Prince William. Perhaps it is because the country mourned the death of his mother, that we kind of took him and Prince Harry to our hearts in a way that is quite unique...more likely it is because he has shown himself to be all that could be wished for in a prince: the common touch with the dignity and mystique of royalty; the ability to empathise with ordinary folk and yet to remain a Prince.

And Kate....well, everyone seems to be claiming a part of her right now so I will stick in the oar for the Leeds connection! Her ancestors gave their name to an area of the city (Middleton) and were part of the philanthropic founders of this northern place.

There is so much excitement throughout the country – such a sense of celebration - and it seems like everyone is not only wishing this lovely couple well, but also being so grateful for this opportunity to celebrate who we are as a nation. You have to admit the inch perfect placement of the knives and forks and glasses on the tables, the perfect timing of the processions and the carefully measured placement of every guard along the route is really rather wonderful! Just for tonight and tomorrow, I am so very proud to be English/British...and as night falls the song from ‘Camelot ‘ comes to mind:

I know what my people are thinking tonight,
As home through the shadows they wander.
Ev'ryone smiling in secret delight,
They stare at the castle and ponder.
Whenever the wind blows this way,
You can almost hear ev'ryone say:

You mean that a king who fought a dragon,
Hacked him in two and fixed his wagon,
Goes to be wed in terror and distress?
Yes!
A warrior who's so calm in battle
Even his armor doesn't rattle
Faces a woman petrified with fright?
Right!

You mean that appalling clamoring
That sounds like a blacksmith hammering
Is merely the banging of his royal knees?
Please!

I wish the newlyweds all the best!