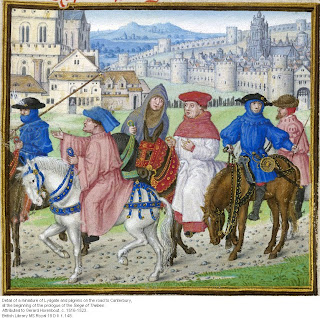 Whan that Aprille with his shoures sote
The droghte of Marche hath perced to the rote,
And bathed every veyne in swich licour
Of which vertu engendred is the flour...
...Thanne longen folk to goon on pilgrimages...

I find this opening to the Prologue of Chaucer’s ‘The Canterbury Tales’ so wonderful because – in spite of its ‘olde English’ that is like a foreign language today – it speaks to something quite timeless: the desire to go on pilgrimages. Even more interesting to me is the fact that he mentions April drawing that longing from people and, though this was written over five hundred years ago yet every spring, just like those 14th century pilgrims, I, think so many people still feel that ‘pull’ in Spring to make things clean and new on every level. ‘Spring cleaning’ seems to be an innate thing – like nest building – and whatever brings us closer to our natural way of being, in tune with Nature, seems to me such a beautiful thing.

All over the world there are pilgrimage sites and holy places of many faiths and it seems that no matter what one’s Creed or beliefs, the same sense of wonder and transcendence pervades them all. Whether they be stone circles or the sites of apparitions or the homes of saintly people of the past, it often seems that places absorb the faith of, and all that is finest in those who go there. I have been in old chapels where the walls themselves seem to drip sanctity; and I have been in ancient woods or wandered in Pagan places where the trees and the earth itself seem to have absorbed that same sense that there is so much more to us than the daily ‘stuff’’ with which we fill our lives. (Incidentally, it is beautiful that the Christian monk, Thomas Merton, when visiting a Buddhist shrine was advised not to enter since – at that time – it was not in keeping with his religion. He entered and later wrote of it being one of the most wonderful experiences of his spiritual life).

Interesting, too, in ‘The Canterbury Tales’ is the odd collection of pilgrims! Saintly, lusty, uncouth, avaricious, interesting and bores; those who came to find Heaven and those who just came along for the ride: these people might just as well have stepped out of the 21st Century. Yet none of those people is simply uncouth, lusty, lazy or anything else – that is but one small facet of their behaviour and they had all chosen to go on this Pilgrimage in search of something more profound...perhaps to discover the wholeness of who they were.

The realisation that, no matter how sophisticated we think the world has become, there are some things that don’t change (our connection to the earth, our human characteristics, our natural cycles and the humorous loveliness of people) and there are eternal truths which do not change, is a very beautiful thought. There is always so much more to us all than meets the eye....

Perhaps this also explains to a small extent the appeal of beautiful palaces and stately homes and the Royalties of Europe. Among the Kings and Queens of the past, the same characters existed as exist today and as were described in ‘The Canterbury Tales’. Marie Antoinette was sometimes frivolous; Edward VII was sometimes a glutton; Wilhelm II was sometimes arrogant; Alexandra of Britain (Denmark) was obsessed with her children and always late; Queen Victoria was sometimes obstinate and domineering (other times, like a little child in search of someone to look after her) etc. etc. etc. None of these people was simply that one facet of their behaviour and, as Royalties, their characteristics appear to have been exaggerated until they are written off by many people as simply that one aspect. Their homes, though, their beautiful palaces, like those sacred places, seem to have absorbed something more – the grandeur and dignity of everyone.

It is very lovely that, no matter how sophisticated or dehumanising the world seems to be nowadays, there is always an innate connection with Nature and the natural inclination towards beauty, exactly as flowers and shrubs naturally turn towards the sun.
Posted by Christina at 22:39

Email ThisBlogThis!Share to TwitterShare to FacebookShare to Pinterest
Labels: Chaucer, The Canterbury Tales