The Sport of Kings? 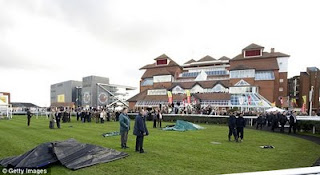 Yesterday, I had the misfortune to see the Grand National on television and was utterly sickened not only by what happened, but also by the commentator's inadvertent admission of how we view animals and the bizarre contradictions regarding animals in our society. Every year horses die in this appalling race and this year was no exception. No mention was originally made of these fatalities but as the horses rounded the course a second time, men with chequered flags were directing them away from one of the jumps. The reason for the diversion was that there was – I quote – ‘an obstacle’ at the other side of the fence. This obstacle was a green tarpaulin covering the corpse of a beautiful creature who had fallen the first time round.
“An obstacle...” – is that all it is? A sentient, beautiful being who had been killed in a barbaric race that lasts about quarter of an hour – for fifteen minutes of entertainment, two horses died. Can you imagine taking part in a marathon or another race where fellow competitors had died and you were told just run around their bodies which were merely 'obstacles'?

The picture above is not from yesterday’s race but from another racecourse. The Grand National isn’t the only race where horses die. I do not doubt that racehorse owners love their horses; the stable hands, the trainers, the jockeys – they obviously have great affection for these animals, and this is what is so bizarre. Would you willingly allow your pet to take part in something so dangerous...would you willingly force your child to do something like that? They say, “Oh the horses enjoy running and jumping...” Do they enjoy breaking their necks or their legs and being shot while the crowd goes on cheering as though nothing has happened?

For the past couple of weeks, people have been appalled by the cruel treatment of the elephant, Annie, who was rescued from a circus and is now happily rehoused and enjoying her life. That an elephant should suffer cruelty for the sake of entertainment is an outrage. Is it anymore outrageous that so many horses should be packed into that race and forced to leap such high fences?

And when the race was over and the dehydrated winner was taken away to be rehydrated, the crowds continued their cheering and I doubt anyone watched the poor dead creatures being carted off to wherever they cart dead horses off to.

They call this ‘the sport of kings’. There are few kings left now in Europe and it is a great pity that, having lost so much of the finer part of many European monarchies, we thought to keep this appalling treatment of such beautiful animals.

“If you have men who will exclude any of God's creatures from the shelter of compassion and pity, you will have men who will deal likewise with their fellow men.” St. Francis of Assisi
Posted by Christina at 11:45

Yes, a beautiful post, as usual, and a lovely quote from St. Francis.

Apparently, King Albert I of Belgium would not even hunt. He considered it cruel and unjustified.

Thank you for your comments.

Matterhorn, I am so pleased to hear that of King Albert - what a great man and ahead of his time. If only more people had paid attention to him! It says a great deal about the character of the man, doesn't it? Being so courageous himself, and also being a great sportsman, he didn't see the need to kill innocent creatures. Thank you!