On the beautiful blog ‘Tea at Trianon’ there is a wonderful post about Tsar Alexander II’s emancipation of the serfs.

I read this shortly after watching a brilliant TV documentary last night, which 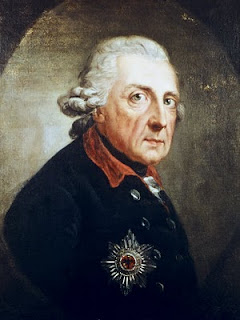 included so much fascinating information about King Frederick the Great of Prussia. From his most famous quotations and the little I had read of Frederick, he had always seemed to me to be a rather stereo-typical war lord who earned the epithet ‘the Great’ through his conquests and military strategies. It’s always so wonderful to be proved wrong! Frederick, it turns out (as I am sure most other people already know, though I have been a complete ignoramus about him and intend to rectify that!), was so enlightened! He lived a very simple life, totally dedicated to his people and his county, encouraged education and learning, built some of the most beautiful buildings in Potsdam and the rest of Prussia not for his own use but for the well-being and edification of his people, and he wrote some magnificent lines which, unfortunately, I have not yet been able to find, about the role of a king as a servant of his people and if the king’s and the people’s interests are conflicting, the king must subjugate his own wishes. For these reasons, far more than for his military conquests, he surely earned the ‘Great’.

Becoming absorbed in this new insight, I realised at once that I felt the same 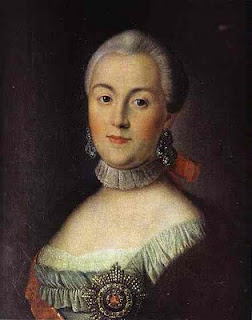 excitement as I felt on discovering the truth about Catherine the Great many years ago. Until then, all I knew of her was the story that she murdered her husband and allegedly had many lovers, and the curious and totally unfounded story about the bizarre manner of her death (she actually died of a stroke). Discovering the truth about Catherine was enlightening. She was one of the most forward-thinking monarchs of the age. Seeing her footmen standing around with nothing to do, she handed them books and when she was told that they couldn’t read, she arranged classes for them. She cared intensely about her people’s welfare and, although she had been virtually dragged to Russia at an early age and forced into marrying a sadist, she dedicated her life to the Russian people.

Alexander II, Frederick and Catherine – three very different characters but each with the good of their people at heart. Sadly, Alexander II hasn’t been called ‘the Great’ but, like his grandson Nicholas II, and like the majority of the 19th and early 20th century monarchs, too, he dedicated himself to a life in the service of his people. I wonder often, has there been a royal tyrant in Europe the past two or three hundred years? I don’t think so...but there have been several socialist or revolutionary tyrants who seized power from the royalties.

(In our more sophisticated age, there are shady politicians, bankers, corporate financiers and arms dealers who carry out their tyranny behind the scenes and manipulate currencies, the news and world affairs...but history shows that those who seize power inevitably end up being destroyed by it.)
Posted by Christina at 23:56

Elena Maria Vidal also has a very nice article about Catherine- perhaps you've seen it already, but here is the link:

Thank you for the wonderful link! I love the beautiful 'Tea at Trianon' blog and, have just read the brilliant post about Catherine the Great - thank you!

Thank you for the link!