(I trust this doesn't appear as a mere aside to this post but words are inconsequential in such times and it would be inappropriate to say more - sincere thoughts and sympathy to the people of Japan at this time). 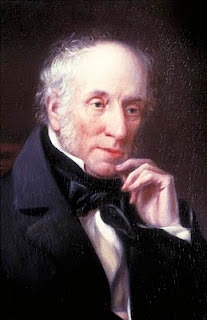 As soon as he heard of the unleashing of the French Revolution, the English poet, William Wordsworth – a young man at that time – hurried to France to be part of this great movement towards liberty and individual freedom. Impassioned and animated by what was happening across the Channel, he believed that people had cast off the shackles of centuries and a new age was dawning and he wrote some of his most wonderful poems...Then he witnessed the murder of a king and the indiscriminate slaughter and bloodshed that followed and he returned disillusioned to England where eventually he bought a beautiful house in the Lake District and wrote some of his dullest poetry!

Wordsworth’s zeal at the outbreak of the French Revolution is understandable. It becomes even clearer in the light of William Blake’s poems (and Blake, in my opinion, is far better and more genuine poet). Blake saw the de-humanising of people that came about throughout the Industrial and Agricultural Revolutions, where people who had lived a rural life, in tune with Nature, were suddenly – due to the Enclosure Acts, and the advances in technology that led to ordinary journeymen losing their livelihood – thrust into slum dwellings in appalling conditions, deprived of dignity in places where children (especially those poor little pauper apprentices) were horrendously overworked, abused and disposed of in those ‘dark Satanic mills’ (the towers of which, incidentally, still line the ugly view from the train window between here in Leeds and neighbouring Bradford). Seeing the world move towards such a mechanical and inhumane way of being, where people were no longer individuals but simply cogs in the wheel of industry, I think I, too, would have rushed to France for that Revolution or rather that attempt to stop the way that people were being turned into automatons.

The question is, though, what where they rebelling against? And who took the blame and became the scapegoat for all the wrongs that people suffered?

They were rebelling against so-called ‘progress’ that was depriving them of their individual humanity and creating a sense of insecurity, and yet they chose as their scapegoat a king who, without having chosen such a role, actually cared about their well-being. The King, unlike the industrialists, had nothing to gain from turning his people into mechanical parts. He hadn’t looked for power. He hadn’t sought a throne. He did what he thought was his duty and would have been happier mending clocks. Yet this innocent man who had been forced into marriage, humiliated for his early failure to produce an heir and whose life had been mapped out by others from the start became the scapegoat for the angry dissatisfaction of his people.

No matter how deeply I delve into history, I don’t understand this obsession with Revolutions and killing or blaming kings. The average French person in 1789 probably had no more interest in who was on the throne than the average Yorkshireman cared about what was happening in London. What mattered to people then – and matters to people now – is the quality of their lives. If life is hard, if business fails, if there is massive inflation, the immediate response is either to look for someone to blame and be angry with them to the point of rioting or sending them to the guillotine, or to surrender in submission as a victim of circumstance. Are we so weak and dependent and lacking in the ability to take responsibility for ourselves that we need always seek a scapegoat?

There’s another way forward, I think. All these revolutions in the name of liberty merely exchange one notion of tyranny for another. If ever there were anything to learn from history it surely is that no one outside of us has power over us. No one outside of us controls our circumstances unless we allow them to do so. The alternative to ‘allowing them to do so’, isn’t to behead or shoot them, since we would then merely replace them with another perceived tyrant. The alternative is to realise that no one, absolutely no one else, is responsible for our experiences. We get to choose how we view the world and how we are with other people. There is no ‘them’ and ‘us’ anymore. There are no ‘haves’ and ‘have-nots’ and so there is no need to squabble over power.

After all, “Look at the lilies of the field. They neither toil nor spin (nor get up with the clock, nor feel jealousy or fear, nor kill kings nor stir up trouble in other countries so we can make some oil deal) and yet even Solomon in all his glory was not arrayed like one of these...”
Posted by Christina at 23:42

Beautiful post, Christina. It made me remember of the Cuban Revolution and how many Latin American intellectuals felt attracted to it and its leaders (Fidel Castro and the Che Guevara). Many abandoned their enthusiasm when they realized that it just caused more suffering and even more opression to the Cuban people. No revolution has been truly positive, in my opinion.

I would love to see France as a monarchy again, as I firmly believe that the real identity of France is a monarchic one. Nowadays we see the current system trying to create some kind of President-King. More than two centuries have passed since the downfall of Louis XVI and they are still unable to leave their monarchic past behind.

Thank you, Jorge, for your interesting comment.
I agree with you that no revolution has ever been truly positive and I think that is because most revolutions are inspired by hatred of the present system rather than love of a new idea. When a king os desposed, a tyrant virtually always jumps into the vacuum.
Your thoughts about France are very interesting and informative. Thank you!

Beautiful post indeed~ and I agree with Jorge about France.