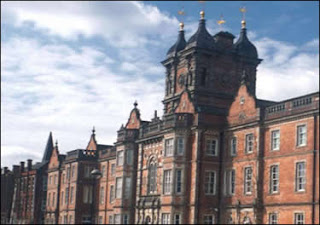 One hundred and fifty years ago today the Leeds Union Workhouse opened. Over the past century and a half, it has developed into one of the country’s most prestigious hospitals with many wings and modern buildings, but there are still visible remnants of the old workhouse (much of which is now museum).

The workhouse – yet another vile product of the industrial revolution – was among one of the first institutions that, to my mind, marked the dehumanising of humanity. When England – and particularly the north of England – was largely dependent upon farming, most people lived in villages or parishes, where they worked the land, paid rent and a couple of days labour a year to the local landowner or squire, weaved and spun in their cottages and took their wares to sell in the nearest market town every week or so. (Even today, Yorkshire is filled with road signs pointing to ‘Historic Market Towns’). It wasn’t by any means an easy life. Most cottages were pretty squalid; when harvests were bad, people starved, animals and people were often undernourished...On the other hand, there were some advantages: people were people. Whether you were the village idiot or the eccentric midwife, local witch or passing labourer, you were a unique person, accepted in your own right. You contributed – often by tithing – to the parish poor fund, and the local parson handed out that money to the elderly or those who could no longer work. Parish Relief, as it was called, worked quite well when the harvest was good and not many people were claiming it.

The Enclosure Acts changed everything. Cottagers were evicted from their homes. Animals were cruelly fattened beyond recognition. Village idiots were placed in institutions and, as the towns developed into industrial cities, churning out more cloth in a day than an ordinary weaver could produce in a year, more and more people were thrown ‘on the mercy of the parish.’ Since the Parish Relief couldn’t meet the growing demand, the government authorised parishes to group together in a Union and, instead of handing out money, they should build workhouses – hence the Leeds Union Workhouse.

The workhouses were created to discourage people from being poor. 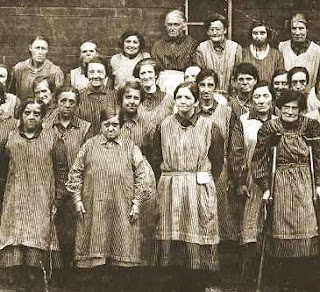 They did this by making these places as dehumanising as possible so you would only go there if you were absolutely desperate. Men and women were segregated and, since many people who arrived at the workhouse were elderly couples who could no longer work, this meant that people who had been married for decades were not allowed to see each other again. Forced into uniforms, sitting in rows, eating and working in silence, the workhouse inmates’ lives were as appalling as those of the people who later were forced into concentration camps.

Who was responsible for this? Not monarchs, not princes, but petty-minded officials who believed themselves to be the elite, more intelligent than the masses, and the only ones capable of controlling an unruly and unintelligent society.

Today, of course, we are far more enlightened. We no longer allow ourselves to be regimented by people who know better; there are no longer elite groups who believe that most people are ignorant and need to be put in their place...
Posted by Christina at 23:52

"Today, of course, we are far more enlightened. We no longer allow ourselves to be regimented by people who know better; there are no longer elite groups who believe that most people are ignorant and need to be put in their place..."

I think you will find that is a very nieve statement. We certainly do have elite groups who believe they are superior to the rest of us. Both Ken Clarke and Lord Mandelson along with other notable V.I.P's were photographed attending a meeting of such a group in Chantilly, Virginia just a few days ago.

I predict the return of the 'poor house' sometime within the next 50 years, and they will make the old Dickension versions look like sweet little holiday camps!

I was being facetious when I wrote that these things don't happen today :-). Are you, by any chance, referring to a meeting of the B'g group? It's very true that there are self-proclaimed 'rulers' who work in a very shadowy fashion to control everything! (My Shattered Crowns trilogy covers how these groups operated and prolonged the First World War).
Thank you again for commenting!