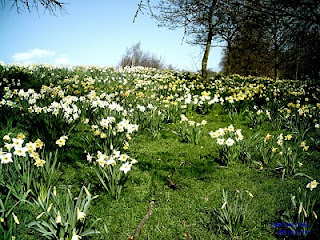 It is Spring...the daffodils are blooming; the sky is blue and the sun is shining, the lambs are frolicking and the world looks so beautiful...That matters far more than what comes next in this post...

In 1914 the Russian army rolled into war to defend ‘little Serbia’ which had come under attack from the Austro-Hungarians who were intent on crushing the Slav dream of a united South Slav Kingdom. To the average Austrian, the attack was a righteous response to the murder of their heir, Archduke Franz Ferdinand, and a necessary measure to protect the peoples of their Empire. To the average Russian, the defence was a righteous response to a bully who was placing impossible demands for reparation on Serbia. They were all fighting – apparently – to protect someone else....but who they were fighting for became lost in the scale of the slaughter. In the end there was nothing but disillusionment for all who lived through the First World War.

Going back a little further...At the time of the War of Independence when the Americans were throwing off the yoke of oppression imposed by Britain, Simon Bolivar was leading an equally successful campaign against Spanish rule in South America. He enlisted to his cause many foreign troops – including some high-minded British officers and soldiers who believed that Bolivar would do for the South what George Washington had done for the North. Some of those soldiers were in it for themselves, believing they would be rewarded with land, but others believed they were fighting to ‘save’ the native South Americans from a tyrant. In fact, Bolivar, having disposed of the Spanish, simply continued to oppress the ordinary people, and those soldiers ended up disillusioned.

Going back still further...in the Middle Ages, knights from all over Europe, hearing of the oppression of Christians in Jerusalem, set out on a series of great Crusades to rid the Holy Land of Islamic tyrants. After some hundreds of years of slaughter and carnage, wins and losses and atrocities committed on both sides, the Knights were not only defeated but made outcasts by their own Church.

In each case – and there are hundreds of such cases throughout history – the dream inspired in people was the removal of a tyrant and the protection of that tyrant’s victims. It’s a tried and tested formula that works well because most people want to help their neighbour in need and want to protect the innocent. What greater feeling can be aroused in a good man than that he might be a knight in shining armour defending someone in distress? Isn’t that honourable and noble, and don’t we have a duty to help our neighbour in need?

And yet...and yet...How many more countries will we bomb? How many more tyrants will we set out to overthrow? How many more wars – now euphemistically described as ‘military intervention’ – will we fight before we realise that there is always a quite different agenda behind what the news stories tell us? History shows us that nothing is ever as it appears in the news at the time...Wars are never about what they are said to be about and the overthrowing of tyrants is rarely quite as simple as it appears. Iraq, Afghanistan, Libya...

It’s a dangerous business, overthrowing tyrants. Of course, no one wants tyranny but there wouldn’t be any tyrants if there weren’t always people ready to fire the guns for them....and the people who fire those guns are inspired by the same kind of ideology that they, too, are knights in shining armour, doing what is best for others. Can one man really hold so much power over others?

It is beyond bizarre that after all these thousands of years of wars and tyranny and all the rest of it, we still go on and on engaging in these mindless conflicts. It couldn’t happen if people stopped listening to politicians and leaders. It wouldn’t happen if we minded our own business and simply paid attention to who we are, not blaming others for our misfortunes or trying to impose out ideology on others, but recognising our own individual brilliance, being quiet within, and seeing in everyone the expression of the Divine.

I prefer to listen to birds and look at daffodils and talk to trees than to listen to political leaders. People who talk to trees are seen as quite mad...but what could be more mad than failing to learn from the past and continuing this relentless nonsense of killing each other in the name of freedom?
Posted by Christina at 22:55