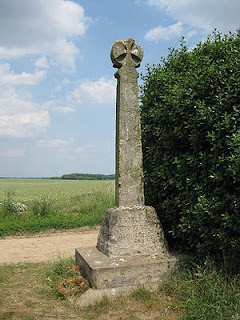 Recently I heard a brief news report about the necessity of making battlefields heritage sites and therefore protected land . Apparently, as the law stands at the moment, anyone can build anything on the sites where people fought and died - and there are so many of them around England. Initially, I thought, "Yes, of course, they must protect these sites...." and then began to wonder...

This rainy summer's evening, driving home as often happens across the site of Towton - the 'bloodiest battle ever fought on English soil' (with 'losses' - euphemism for slaughter - which, by the size of the population at the time are equivalent or perhaps exceed the slaughter on the first day of the Somme) - I looked across the fields and wondered whether there is an inch of land anywhere on which people didn't die and kill for someone else's beliefs. There are many people who keep alive the memory of what happened at Towton that Palm Sunday, nearly 600 years ago. They enact the battle sometimes, I think, and the same is true of all of the English Civil War battles and perhaps many others from the Wars of the Roses. Perhaps old wounds and old causes are somehow rooted in our psyche, but it's interesting that no one yet dares to re-enact or play at the First or Second World War battles. Perhaps they need that buffer of history to soften the blow of what really went on.

So, at Towton, the Lancastrians were basically massacred and it was a great Yorkist victory. But, as far as I can make out, the bizarre thing is that the Lanscastrians were were more 'northern' and the Yorkists were based more or less in the south - so, like all wars, it was nothing like it first appeared, nor was it fought for the reasons that history presents. I guess most of the thousands of young men (boys) who died that day were either just looking for a better way of life or looking for excitement. How many of them really knew what they were fighting for? Even now, centuries later, it's so hard to know what they were really fighting for.

Another odd thing about wars is that when they are over and monuments rise, we always speak of people dying for this or that just cause. It's never really mentioned that they actually killed other human beings for the same cause. There is something heroic about dying for a cause and nothing heroic about killing for one....basically, the causes are never just, and there has never been any truth in 'the old lie' (quote Wilfred Owen) 'dulce et decorum est pro patria (or anything else!) mori"

I would not like to see a car park or tower block or anything else built over Towton or any other battlefield but I sometimes think it would be beautiful if, instead of honouring 'heroes' of old wars with monuments, we simply put a wreath of flowers that said, "ooh...we made a mistake there..." and perhaps, rather than honouring where we went wrong so often in the past, we raised many more monuments in places where we got it right. Perhaps the odd daisy chain in a happy park one summer's afternoon or a bluebell filled wood one May day might say,

"Here,thousands of people came over centuries.
They spent their afternoon watching birds soar through the wisps of clouds in the brilliant blue sky,
Watching swans glide over the water,
Listening for the hum of earthworms in the soil,
The sound of grass growing,
And the love song of the bee to the buttercup.
Here, people laid aside causes and lived one happy summer's day,
and they were free."
Posted by Christina at 23:54