Growing up in the more or less leafy suburbs of a northern city, founded and once flourishing on the wool trade, and much preferring the more original Yorkshire landscape of moors and rivers and crags and gardens, it often seemed to me as a child that the nearer I went to the city centre, the uglier the city became. The main problem was bricks! Thousands upon thousands of them - millions even! Travel, in those days (the 1970s) by car, and there were endless rows of terraces. My school itself, which I loved and which was beautiful, was built of countless red bricks. Travel by train, and there were numerous red brick bridges, tunnels and sidings. Bricks, bricks, bricks; walls, walls, walls....and they all seemed so very ugly, so uniform and confining, so colourless and dull. They were solid. They didn't flow like rivers flow. They were static. They didn't change like the trees change. They lacked the creativity and beauty of the original stone walls that divide fields and which blend so beautifully into the landscape. They were just there - millions and millions of red bricks. Occasionally I wondered who could have spent so long putting them there and wasn't it utterly soul destroying to have to start placing one brick on another to create even a small wall, let alone miles upon miles of tunnels and terraces. To some extent they stood for all that was the worst about the Victorian era and the industrial revolution - that terrible (to my mind) change from living with Nature, to living with so-called progress. The era when people were no longer people but merely cogs in the wheel of industry. (Incidentally, I also think that was one of the most beautiful eras in the whole of history - the age of civility, house parties, Queen Victoria, monarchs and pageants and loveliness!).

The other day, though, 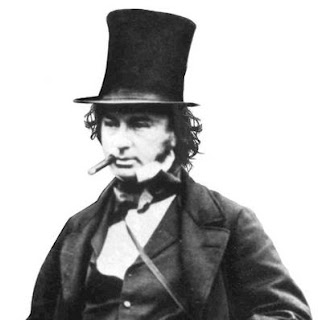 I saw part of the BBC programme about 'Great Railway Journeys' in which the presenter spoke so enthusiastically about Isambard Kingdom Brunel's brilliance in standing up to the all the cynical voices which say something can't be done. Rather than arguing, Brunel just went ahead and did whatever he had planned and he succeeded in all of it. His railways, his ships, his bridges - everything flourished because he believed in them and didn't give the cynics a second thought. What a brilliant man! What a brilliant mind! One bridge, according to the programme (possibly this one??*) 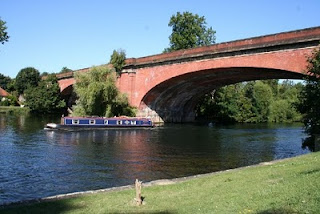 involved him measuring the angle of every single brick - wow!! Who could be so single-minded as to do such a thing? Better still, Brunel created beauty. He combined his engineering skill with an aesthetic sense (and this was a man whose father, like Dickens' father, was stuck in debtors' prison) A long time ago, I saw a couple of other programmes about the building of the sewers in London (how many bricks are there??) and the building of the London Tube (again - all those bricks!!). Those feats of engineering are so awe-inspiring. More awe-inspiring are the aspirations of those Victorians who had a vision of something and brought it into being.

I still find the brick walls ugly but that is probably a fault in my vision. Some people love and find beauty in power stations and cooling towers. Personally, I prefer rivers and trees and the changing scenery of Nature but I do stand in awe of that vision and the almost Zen-like attention to detail of those who day after day place one brick upon another and enabled me to travel by rail to town. I guess that without all that Victorian engineering, there would never have been room for people to move on to develop such fabulous things as computers, the internet, the ability to write on blogs and to be in contact with people from all over the world.

Next time I see the brick tunnels, I shall say, "Thank you!"

*http://en.wikipedia.org/wiki/File:Brunel's_Railway_Bridge_at_Maidenhead_-_geograph.org.uk_-_94793.jpg
Posted by Christina at 23:41

What a strange coincidence - I've just finished drafting a post (going up 4 Sep) about bricks! MY 6x gt grandfather was a brick and tile maker, so not as grand as Brunel. But like Brunel, is legacy still stands in many of the houses of his village. I suppose we'd always rather have stone buildings to look at, but old brick has a beauty all its own too.

It must bring you a great sense of continuity and pride to see those lovely buildings created by your ancestor. How interesting and what thoughts it must provoke!