The Incredible Wealth of Kings 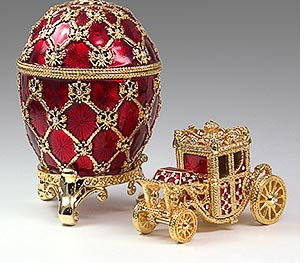 Much is written of the incredible wealth of the Romanovs and other monarchs and most of it is written in a way which implies that the greed of the few contributed to, or was responsible for, the poverty of the many. Here's a question (which is not original, but is so true!) : If I become as sick as I can be, will I make the sick people well? No...obviously not. If I become depressed, will I make sad people happy? No...obviously not. If I am penniless, will I make the poor people rich?....

Occasionally, articles appear in newspapers about how much 'it costs the tax payer' to keep our Royal Family. It turns out it is a heck of a lot less than keeping a president, and if the money were to be distributed among all the people who paid that tax, they would gain a couple of pennies and nothing more. On a personal level, our Queen lives very frugally. Nicholas II also lived a frugal life - he once corrected his son, Alexei, for not taking care of the furniture in one of the palaces because, Nicholas pointed out, 'it doesn't belong to us, but to the country and we are custodians.'

A great pleasure for me is visiting beautiful places - stately homes, once owned by the very rich - and seeing beautiful belongings there - hand- carved furniture, beautiful paintings, beautiful buildings, landscaped gardens (I go almost every day to one such place and stand in awe of the beauty of it, filled with gratitude for the vision of the person who once owned it and the countless people he employed to create it and there are signs all over the place of people who took such pride in their creation of it) . I do not imagine that I will ever own such a place, but seeing it brings me joy and a sense of beauty. Supposing the owner of that house had said, "I am rich and there are poor people so I will share all this out...." There would be nothing there for me to enjoy today.

Nowadays, as in the past, the very wealthy (like Bill Gates and Richard Branson) employ vast numbers of people. The people don't have to work for them; people can do as they please but some people love their work. Many people employed by the Romanovs and Louis XVI were probably in the same position of wanting to be employed and enjoying their position. Many others, of course, didn't enjoy that and so set up on their own - there are countless rags to riches stories of people who stopped being victims and rose out of their poverty. Others were simply jealous and wanted power for themselves. Others surrendered to their victimhood.

Yes, the aristocrats squandered their wealth while others starved. Yes, the Romanovs owned jewels that were beyond price and in their own country others died in their poverty but had the Imperial Families given away all they possessed, would people have still starved? Yes, they would. Look at what came afterwards. Tsarina Alexandra of Russia tried to engage the aristocracy in meaningful work but they mocked her. The Terror in France did not heal the poverty of those who were poor. The Revolution in Russia led to huge queues for something as small as a bath plug. Nicholas personally (along with other members of the family - notably, of course, Grand Duchess Elizabeth) gave massive amounts of money to help those in need during the famine of of the early 1890s. His father, Alexander III, stopped the exports of grain (as is happening again today due to the fires) at a massive loss to the economy of the country so his own people could be fed. After the Khodinka Meadow tragedy, Nicholas paid for the funerals of each of the victims.

The Tsarina's sister, Grand Duchess Elizabeth, - someone to be greatly admired, I think, and an extremely wealthy woman - gave away all she possessed to make life better for the poor. She trained as a nurse, lived as a nun in the worst part of Moscow and cared for people, tending those who were so ill that the hospitals wouldn't treat them. Come the revolution, Lenin shut down her hospitals, orphanages, murdered her and scattered her companions, sending them into exile.

The Romanovs, like the Bourbons, were extremely rich. Did their wealth deprive the poor of wealth? Does my health deprive the sick of health? Does my joy deprive the sad of joy? Wealth, joy, health....they're all freely available when we stop projecting our problems onto others, don't you think? Bless the wealthy people who have left such a legacy of beauty. It's a whole load better than the squalor of slums and the legacy of the poor.
Posted by Christina at 23:11

Apparently, we find that as rich as the Romanovs were, they lived a very frugal life. There is a story of Nicolas I bringing his own bag filled with straw to sleep on when he went to visit Queen Victoria.

I know they and their wealth have been misunderstood and misrepresented. Nicholas II hated the idea of taking the position of Czar. He wanted nothing more than to live a simple life.

Often the wealth of the Roman Catholic Church is questioned and it is asked how fair is it for so much money to be owned by a church. How to divide it would be the question. If it were divided among all the members of the church, each one may get a few pennies.