Yet another contradictory trait in the endlessly fascinating character of Queen Victoria is her attitude to 'women's rights'. When told of the aristocratic ladies who wanted female suffrage, Queen Victoria was outraged by the idea and wrote: "I am most anxious to enlist everyone who can speak or write to join in checking this mad, wicked folly of 'Women's Rights', with all its attendant horrors, on which her poor feeble sex is bent, forgetting every sense of womanly feelings and propriety. Feminists ought to get a good whipping. Were woman to 'unsex' themselves by claiming equality with men, they would become the most hateful, heathen and disgusting of beings and would surely perish without male protection." This was a woman who commanded the attention of so much of the globe that even today there are countless cities, rivers, bridges, districts and roads named after her. This, too, was a woman who appeared to have one rule for herself and another for society in general.

It was typical of the time that a princess had rather a worse fate than an average factory worker. The latter could, at least, choose whom she would marry and would usually remain among familiar surroundings and friends. A princess, on the other hand, had to go wherever her husband happened to be. Two of Queen Victoria's five daughters moved, at an early age, to Germany to be with their husbands. The next generation saw an even greater upheaval where her granddaughters moved to Sweden, Russia, Denmark, Spain, Roumania and Germany and each of them had to fit in - often with intense suffering and nostalgia - to the Courts of their husbands. Yet, Queen Victoria herself wrote the above passage from a place wherein she had not only wrenched her own husband from all that was familiar, but had also ensured that when it came to her own life, she kept her youngest daughters close at hand.

Louise, her fourth daughter, was 'allowed' to marry a Scottish earl while Lenchen, her third daughter, and Beatrice, her youngest, married more or less penniless German princes who were all but obliged to remain close to the Queen so that she could keep her brood together. Sadly, though Prince Christian 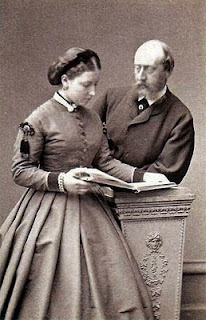 (Lenchen's husband) seemed to thrive, 'Liko' (Prince Henry of Battenberg, husband of ultra-controlled Beatrice, sought every means of escape and died an unheroic death during the Ashanti Campaign). 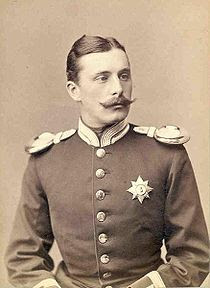 One of the most fascinating details of the Victorian Age is the amount of contradiction within it, all of which is a sure reflection of the woman who occupied the throne. This was an age of prudishness, where even piano legs were covered to preserve decency, yet an age of decadence and mass prostitution. This was an age of civility - of house parties, country houses, beauty and culture, of Tennyson and Elgar and Rossetti alongside the Brontes and Dickens - and an age of destruction of the individual in favour of the 'system'. The age of industry and the brilliance that came from that....at the expense of the individual, when people were no longer someone known and accepted in the village, but rather a mere cog in the progress machine. It was an age of elegance, the swansong of beautiful Prince Albert's dream of what it meant to be beautiful; the age of follies and mock-Gothic castles built on the sweat of those who were happy to slave-labour for bringing forth a new age by those who dreamed of a more enlightened time.

And on top of it all sat a tiny woman - Queen Victoria - trying to come to terms with the changing times. Kaiser Wilhelm, at the outbreak of WW1, said that such a terrible thing could never have happened in his grandmother's time. She must have been one incredibly brilliant being to have been able to span the gap between the old world and the new and. had Prince Albert lived, how different the 20th Century ,might have been....
Posted by Christina at 23:50