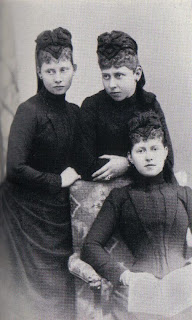 Moretta of Prussia (pictured here with her sisters, Mossy and Sophie), sister of Kaiser Wilhelm, daughter of the Empress Frederick, and granddaughter of Queen Victoria lived such a sad life that I have often wondered about. It always seemed that she 'came in' at such a difficult time for her mother. It was the middle of the Austro-Prussian War, and her elder brother, Sigismund, had just died of meningitis while his father was away in battle. Her mother, Vicky (Queen Victoria's eldest - and probably most intellectually brilliant - child) was deeply mourning Sigismund's death and worrying about her husband, and the strained relationship with her sister, Alice, whose husband, as heir to the Grand Duchy of Hesse, was fighting with the opposing army - what a mess to be born into!!

In Moretta's earliest years, she was noted as having a horror of old ladies in black - unsurprising when you consider the extent of Victorian mourning.
Her life didn't improve much. After several failed romantic attachments, she despaired of ever finding happiness and eventually settled for someone whom she might or might not have loved, only to find further heartache in that she could not have children and the estate they expected to inherit became subject of a law suit. When World War 1 broke out, she was thrown into further disarray because she, though German, had great affection for her mother's native England, and, following the death of her husband, she eventually re-married a much younger man who ran off with her money and abandoned her.

This week, an elderly relative passed on. She was born in 1917, in the middle of the horror of WW1, only 6 months after her mother's favourite brother and several other members of that family had been killed on the Somme. I guess, at that time, most people were going around in mourning and wearing black a lot. My relative's life was, like Moretta's, filled with misery, darkness and gloom - one illness after another for 93 years.

Herein lies the question! In everyday life, first impressions count for a lot with most people. They say we make up our minds about someone within the first 4 or 5 seconds of meeting them. Imagine coming into this world and following that trend. Perhaps, within the first few minutes of being here, we decide how life will be and look for evidence of it all around us: "this is a dark, nasty world....", "this is a sad world where things don't work out....", or, "this is a beautifully happy place...." "Wow! I'm here!"

The good thing is that, whatever we decide then, if we are aware of it, we can change it. I think we all make choices. Some people seem to settle into patterns of gloom and remain there. Others walk through the darkness, maybe look for meanings and work their way out of it. Others live in the moment, smile and shake off the ideas of previous generations. It's our choice, I think. Had Moretta known her own power, her life might have been very different and the same is true of all of us....perhaps....
Posted by Christina at 23:36

Email ThisBlogThis!Share to TwitterShare to FacebookShare to Pinterest
Labels: Moretta of Prussia

Nice post. I think people don't think of how the wars affected people with ties to many countries, and how misery of parents and family members affect children and others. thanks for the post.