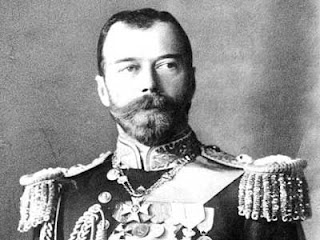 Here's another odd thing about the portrayal of Tsar Nicholas II: if ever there were an example in history of a multi-dimensional man on whom so many historical projections have been based, Nicholas must be a prime example. The Soviets certainly were successful and brilliant at destroying a character and presenting an image that suited their aims.

When the myth of his 'weakness' and foolishness is blown away, he is accused of being an autocratic tyrant, clinging to personal power. The two accusations are quite contrary. On the one hand he is weak, on the other a tyrant. Yes, there were weak tyrants (aren't all tyrants weak - hiding their insecurities behind shows of power over others) but Nicholas was obviously not a tyrant, primarily because tyrants seek power and Nicholas didn't - in fact, he would have shunned it if he could.

This is what is seen as his greatest mistake: his inability to share power. If you were raised in a religious family, or raised in a politically active family, or a family which believed in any kind of system (as most do) you will surely know the extent to which that influences your views and behaviour. Imagine if, from your earliest childhood, you had been told you were to become the Tsar of All the Russias. You were raised by parents who didn't want you to be arrogant about this and so they ensured you lived a relatively simple life - sleeping on camp beds, not seeing yourself as superior to others, not having too much food, but being restricted in your view of the world outside your own home - and at the same time, you had tutors and mentors who told you from the start you had a special role to play and, what was more for a spiritually aware child in a religious background, were told that that role was given to you by God and how you must do your duty at all costs: to protect the autocracy; to be solely responsible like a father to your people...and then at the age of 13 you saw your grandfather, who had tried to soften the autocracy, blown to bits by a terrorist's bomb...Imagine being in those shoes.

So, unexpectedly at 26, you find yourself having to step into the role of autocrat. By nature, you are a gentle, simple person - a man who enjoys the outdoors, loves his family (and suffers enormous pain, seeing his sick son) but, at the same time, you have this 'duty'. What would you do? You would work every hour you had - as Nicholas did - to try to do the best for your people. You would be so occupied with affairs of state that you hadn't even a moment to reconsider where you were at, what other options were open to you, but you would do your very best. Nicholas did that. He did it from the moment he came to the throne and he genuinely wanted to do the best for his country.

Compare that to tyrants - his predecessors, Ivan the Terrible or Peter the so-called Great had massive power-complexes. Nicholas didn't. Even in our own time, in a smaller way, we see those Prime Ministers and Presidents who claim to come forth with a dream of how life can be better for everyone else if we listen to their way of thinking, but in fact they have struggled tooth and nail to get into those positions of power and wish to impose their views. Nicholas didn't struggle for it. He didn't want it. He was a man doing the best he could with a great love of his country and its people.

I think that Nicholas is accused of both tyranny and weakness because he was such a genuine man the like of which we seldom see. It's usually simple to spot the flaws in a tyrant but Nicholas was quite different and, though history has scraped the barrel to find his flaws, it has never come up with a complete and honest portrait of man who loved his people and, like France's Louis XVI, wanted to do his very best for them...and might have succeeded had it not been for those who were the really autocratic tyrants, wishing to impose their views on others.
Posted by Christina at 23:18

Very touching! You are giving me a new appreciation of Nicholas.

I'm glad you mentioned the comparison with Louis XVI. He may have wanted what was best for his people but allowing the aristocracy to live in unfathomable luxury when the people he carried about were starving, is not in any context, a formula for good governance. He may have been a sweet man but he gave the country to the Bolsheviks by stubbornly refusing to share power until it was too late.

Thank you, Matterhorn, and thank you J Cannon. I have some thoughts about your comment. May I respond in a separate blog post?

I have often said that the martyred Tsar's overthrow is proof enough that he was no tyrant. True tyrants are rarely, if ever, overthrown. It is also enough to look at some of the worst villains of the Bolshevik cause (men like Lenin and Stalin) who were exiled on multiple occasions -exiled and not simply executed at first infraction.