An interesting thought about how our thoughts affect our bodies...

Vicky's husband, Fritz - Emperor Frederick III - spent much of his young life being 'gagged' by his father. Every time he raised an opposing thought, he was silenced. At the same time, Vicky was urging him to speak out. He was in a very difficult position. As the time drew near for him to take up his position as emperor, he was diagnosed with throat cancer.

Vicky felt that she bore the weight of the world on her shoulders. She tried to balance so many things but the strain was so great that she couldn't bear it. Nor could she express it. She suffered greatly, too, over the way her children were raised and how the older ones seemed to reject her. She was diagnosed with breast cancer and spinal cancer.

Alice was never allowed to express her grief at the death of her father as she was too busy caring for her mother and helping to keep 'the firm' running. When her little daughter, May, died, she was compelled to keep that silent, too....she died of diphtheria, which affects the throat.

Serge lived with the horror of what had happened to his father. He also had - I think - some kind of loathing for his body, which was literally obliterated by the bomb that killed him.

There are many, many more examples and the deeper we go into our own thoughts, the more clear it is how we choose to destroy or re-create ourselves....Ho hum...It's a thought which offends many people because we all like to play victim at times. "It wasn't my fault I caught this or that...." It's not a question of 'fault' though, it's more a question of responsibility. Living in the 'image and likeness of God' , our thoughts have tremendous power - far greater than we choose to be aware of, I think. "Act of God" is a something assigned to nasty eventualities - as though a loving creator would be so petulant as to wipe out his/her people! Perhaps 'act of thought' would be more appropriate for many things. "Acts of God" - acting from our highest selves, would surely only mean life and health and freedom.
Posted by Christina at 23:20 2 comments: 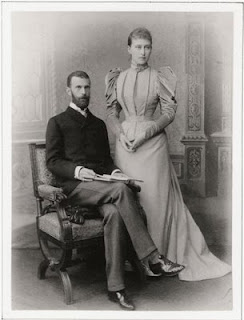 On 17th February 1905, Grand Duke Serge Alexandrovich was blown to pieces by a terrorist's bomb. His wife, Ella, Grand Duchess Elizabeth, heard the explosion and hurried to the scene where she picked up what was left of him with her own hands and, having his remains placed in the neighbouring Chudov chapel, knelt in prayer as his blood trickled down the steps.
Three days later, she visited his assassin in prison, taking with her a Bible and an icon of Christ.
This event changed her life forever. Little by little, she gave away all her jewels and other possessions to create a sort of palace of the poor, where she nursed the most abject patients, built an orphanage and arranged all kinds of work for young people.
Grand Duke Serge was hated in proportion the degree to which Ella was loved. His name has been vilified through history but he was not a 'bad' man at heart. Highly strung, reactionary and probably unable to consummate his marriage, he became more intransigent each year and his treatment of the Jews in Moscow was horrendous (but he was acting, too, on the orders of his brother, Tsar Alexander III, and both of them were under the sway of the Procurator General of the Holy Synod). Serge also took a great deal of interest in the people and truly believed in Tsardom as building the kingdom of God on earth. His servants respected him and were devoted to him (which says a lot, considering 'no man is a hero to his valet'). Countess Tolstoy records in her diary how she visited him to ask for a military position for her son, and how very accommodating he was. She also wrote of his travelling all the way from St. Petersburg to Moscow for one day to attend a wedding of one of his servants.
Ella, who was so different from him, would never hear a word against him. I truly believe that he, for all his faults, was one of those people whom history turns into a monster, when he was just a man, doing his best with what he had...Blinkered he might have been, prejudiced he might have been, but cruel and nasty, he wasn't.
Posted by Christina at 22:25 No comments:

This is utterly bizarre to me. In the same week that Carol Thatcher was sacked from the BBC and received death threats, apparently, for using a word that was simply the name of a toy a couple of decades ago, without any malignant intent, the excellent Channel 4 programme, "Christianity - the History" showed the bonfire night antics in Lewes, where they burn an effigy of the pope.

My own - rather negative - view of the pope is irrelevant here. The question is political correctness and different laws applied to different people. The Channel 4 programme is brilliant. Presented each week by a person of a different faith - so far a Jew, a person who was a Catholic and isn't, a Moslem, a Catholic who is a convert from Protestantism - it is unbiased and wonderfully thought-provoking. The overriding thought it provokes in me is, "How come, when so many people follow their own beliefs and do so from their own sense of what is so for them, the authorities step in and control and inspire hatred and violence?" None of it has anything to do with beliefs. It all has to do with control. If people are confined by what they can and can't say, what they can and can't believe, someone else can take over and control them.

I am small - but not exceptionally small! - of stature. I have been in places where people have said things like, "You're small, aren't you?" It's rather rude. I joke about my height and think, "So what??". I know tall people who have received the same kinds of comments. I know red-headed people who have been called 'carrot top' or 'ginger nut'. I know black people who have suffered real abuse, and those who have been happy to be joked about the colour of their skin, or their hair. (Gosh, how many times have I compared mine to a mop??). I know blonde women who have been said to look like Barbie dolls - is that any different to comparing someone's hair to a golly off the old jam jars? Racism is utterly vile. Any form of discrimination is or control is utterly vile.But there was nothing racist or anything or the sort in what Carol Thatcher said.
So Carol Thatcher gets the axe, and I am amazed at Jo Brand reporting it (I thought she was rather liberal, whereas in fact she must be as narrow-minded as you can get to waste time over it!).

But then, they can burn the effigy of a person in Lewes - someone else's beliefs which, even if I do not share, I respect? Ann Widdicombe can receive hate mail for her conversion, and very nasty letters about her appearance? It's utterly bizarre.
Posted by Christina at 23:08 No comments:

"O let me not be mad, not mad sweet heaven!
Keep me in temper. I would not be mad!" said King Lear.
Queen Victoria, tapping on her forehead, uttered, "My nerves! My nerves!"

So many artists so feebly attempt to imitate a kind of insanity or sense of being 'different' and the difference is what makes them the same. What is madness and what is sanity anyway? Van Gogh, John Clare and countless other artists tapping at their foreheads and unable to stand the way the world works or their own demons come over with a kind of genius now. People who were once described as 'village idiots' often turned out to be the wisest of all. In some cultures, what we call madness is revered.

Obviously, not including behaviours that harm ourselves or others, does insanity simply mean an inability to 'fit' what is expected? What of the madness of entire regimes that commit genocide or stifle the soul? Often led by madmen (Hitler, Stalin and the like) in their day, these regimes are seen as sane and those who stand outside them are mad. In ancient times, madness was seen as 'possession by the devil' and it's interesting to observe that many of the leaders of horrendous regimes, who managed to brainwash nations, were haunted by their own demons - not an external 'devil' but their own insecurities and fears.

We live in such a structured society that, for all the over-the-top attempts at political correctness, any variation from the norm is seen as 'madness'. It's sometimes fashionable among artists to pretend to be 'a bit mad' - it's kind of 'cool' to be off-the-wall, but I find most of those who want to be 'off-the-wall' are very much on-the-wall - rather like those who defied wearing particular clothes in the 60s because they were seen as 'uniform', and so they created their own uniform of jeans etc. Those in suits were the outsiders - the mad ones - then. In the days when anything (except not fitting in with political correctness) goes, the real genius lies in not even being aware of what is normal or expected.
Posted by Christina at 23:42 No comments: