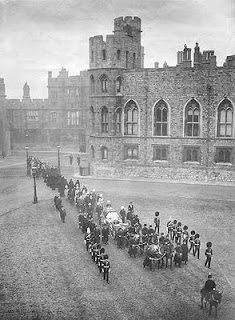 When Queen Victoria died in January 1901, the whole of Europe seemed to reel in shock at the end of a magnificent era. Her granddaughter, the then Crown Princess Marie of Roumania, wrote: "To see it all again if only for a day or two…to have a last peep at the old house…with out dear old Granny the last link is cut off!...I tell you it is inconceivable sorrow for me..."
Another granddaughter, Alice Albany (later of Athlone) wrote: "I had come to regard her as permanent and indestructible - like England and Windsor Castle.”

And a granddaughter-in-law, the future Queen Mary of England wrote: "The thought of England without the Queen is dreadful even to think of. God help us all.”

However, her heir, Bertie, King Edward VII, while dutifully paying his respects to his mother, seemed to breathe a huge sigh of relief and took very little time to throw out many vestiges of her reign. Statues of her favourite servant, John Brown, were disposed of in no time; Buckingham Palace was redecorated and Osborne House was given to the nation (with the exception of the Queen's rooms, which were for many decades gated off).

It might seem quite cold that Bertie should change everything so quickly and, at the same time, the Queen's passing was the passing of a person whose name had become synonymous with all that was best and worst of almost a century. Even to this day, the epithet of 'the Victorians' evokes so many images and it is interesting to look at the small woman who created such a mystique, with which her eldest son was so eager to dispense. "The Albertian era" would probably be more accurate a description of that time, since virtually all of the Queen's positive influence came from the influence of beloved Albert.

For Bertie, though, life in such a household was not an age of enlightenment, but an age of incarceration and asphyxiation. He was unfortunate in being the eldest son of a mother who had such fear of anyone in her family turning out like her 'wicked' Hanoverian uncles, and a father whose horror of infidelity sprang from the effects of his earliest childhood. These parents wanted to do the very best for their son - to keep him 'pure' and turn him into the ideal prince, and eventual king. Instead, unwittingly, they attempted unsuccessfully to curb everything which they saw as 'wrong' and to mould him into their image of what was perfect. Small wonder the poor boy sought outlets in excess; small wonder, too, that while he loved his parents, he strained at the bit and, eventually finding freedom, threw out so many relics of their era, which seemed to him the age of oppression.

Equally interesting is the speed with which Grand Duchess Elizabeth altered everything following the murder of her husband, Serge. Within a few months her life changed in such a way that it appears she must have been dreaming of something quite different for years. It's almost like a simmering, overheated engine that suddenly blows a gasket and it is shocking....but suddeny settles down into a quite different place. The influence of one person over another is tremendous but ultimately, everyone finds his/her own level and nothing lasts forever...

It's interesting that when someone passes on, there are those who choose to mourn for a length of time, and those who choose to move on. There's a weird obligation to feel sad about them, and about someone's passing and not to feel sad is seen as heartless but that isn't always the case. Bertie, without sentimentality, was surely correct. It was immensely sad that the era had gone...but to him a tyrant had let go of the reins and he was free.

It's a bit of a pity that Bertie didn't live long enough to really come into his stride and enjoy the power of his own benign influence for longer. King for only 9 years...had he lived as long as his mother did, I think the First World War might have been avoided.
Posted by Christina at 23:52