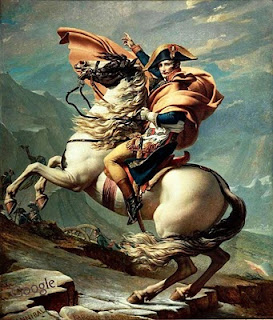 (A brief interlude from “Queen Victoria’s Granddaughters”, which will continue shortly...)

I love history! I just love it with a passion! And I think its appeal isn’t so much the awful cloistered professors-in-towers passing judgement on individual people of the past or the way that old text books make statements such as ‘Germany invaded Poland’ (as if this bit of land could suddenly uproot itself and become that bit of land?? What is Germany? What is Poland? Pieces of land marked out by mankind) but rather it is a never-ending unfolding fascination with what it is to be human. Everyone seems to love a good story – be it in sermons, radio plays, snatches of films – as soon as the beginning of a story is heard, it captures your attention. History is filled with amazing stories and maybe we love stories of other people because basically we are all one and learning to understand ourselves.

Here’s a thing that dawned on me today: isn’t it interesting that virtually all revolutions are born of a self-righteousness which is a mask for hatred and jealousy? And which people are, for the most part, the leaders of revolutions? Little boys with unresolved issues from their childhood acting out their theme on the world stage.

When young, Napoleon Bonaparte, the ‘little Corsican upstart’ who was treated with disdain, ostensibly despised the French. (I think Napoleon was a brilliant general but a very unhappy man who came to an unhappy end - the painting of him was propaganda to continue his myth). He was so jealous of the power of France that his overwhelming desire was to rule that country no matter who stood in his way. He adpated himself to the revolution, spoke up for revolutionary values....and made himself a tyrannical Emperor of France. So much for his 'equality and freedom'.

I wonder if Austrian-born Hitler, knowing that during WW1 the Germans believed their alliance with Austria had them ‘shackled to a corpse’ felt the same inferiority complex about Germany. Interesting how both those men were driven by hatred to rise above their circumstances and ultimately to self-destruct. Lenin and Stalin hated the Tsarist regime but were so quick to move into the Tsar’s palaces (once they had murdered him and his family) and play at being Tsars – and acting out a far more violent and cruel tyranny than the Tsars ever exacted.

Napoleon and Hitler both were devoted to their mothers but disliked their fathers and saw them as weak (Oedipus?). They railed throughout their childhood against perceived slights, and rather than learning to regain the power over their own feelings and self esteem, found a need to dominate others in order to feel secure. No one cane really control anyone else...so obviously when they realised that, they both moved into self-destruction.

What is most fascinating of all is the idea that ‘ordinary’ people believed and continue to believe that their wellbeing lies in the hands of others. Napoleon, Lenin, Stalin, Hitler and every other leader who has ever seized power, was able to do so – and to go on to commit terrible atrocities - because a great number of people felt a need for someone else to take control of their lives and make decisions for them, and these ‘leaders’ (lost little boys) were glad of the adulation and enjoyed the power trip.

I think humanity has grown up a bit recently, but there are still people who view their leaders as the controllers of their lives. People create leaders whom they worship (did you see the election of President Obama?) or love to hate (did you see the applause at Tony Blair's election victory, or Mrs. Thatcher's...and did you watch them depart?). Bizarre how people believe that anyone else has any real control over their lives!

Today and yesterday, endless news articles report ad nauseam of the effects of the government cuts to public spending but I think we give too much attention to what is decided among politicians. It really doesn’t have so large an effect on our lives as people like to believe. It’s all just stories and we have far more power over which stories we choose to listen to, and how we choose to live our lives, than most of us realise.
Posted by Christina at 23:29

Excellent post! I especially like your point at the beginning about the two approaches to history- I guess that is why history can be either very boring or very interesting.

Thank you, Matterhorn. Your kind comments are always greatly appreciated.