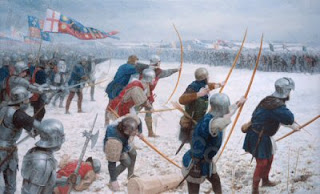 550 years ago yesterday, on a bitter Palm Sunday in a hail storm, the bloodiest battle ever to take place on English soil was fought in the Yorkshire village of Towton. Today, half a millennium later, people still place flowers and light candles in memory of what took place that day when Englishmen murdered other Englishmen and thousands were killed in a rout which led to men stepping on their comrades’ corpses in their desperation to escape.

Ostensibly, it was a battle between the Yorkists and Lancastrians in the Wars of the Roses but really, nowadays, who knows what was in the hearts of those young men when they went to war? Now, when the outcome of the battle is really of no significance, the descendants of those soldiers who died in that place feel only the silence that hovers over battlefields that seems to say, ‘why?’

A long past battle brings people together. On Armistice Day the veterans who fought on opposing sides of World Wars have stood together, acknowledging each other’s courage and each other’s loss. When the war is over and the cause is long-forgotten, the enemies stand together mourning their lost comrades and the loss of innocence and, perhaps, wondering what all the shouting was about.

The same is true of natural disasters...in the midst of the chaos people of all nations reach out to one another and come together. In grief, in tragedy, in the aftermath of wars, we drop our defences and find we have so much in common.

Wouldn’t it be wonderful if we did this naturally, without the tragedies or wars? If episodes like this:

Email ThisBlogThis!Share to TwitterShare to FacebookShare to Pinterest
Labels: 'Random Acts of Culture', Battle of Towton

So very true. Last year my country suffered a devastating earthquake (not as much as in Japan, thankfully). I remember I was reading a book until very late (past 3 am) and when I finally decided to go to sleep, I closed the book, turned off the light and began to feel movement. I immediately stood up, opened the door of the room and went to the garden (my room was apart from the main house, as we were in a beach house) and the earth began to shake enormously. I literally thought it was the end of the world. I prayed during those eternal minutes until the movement gradually stopped (though it later came back from time to time), and I went to the main house where my mother was. She is an incredible woman, so quiet and self-controlled (she had lived another earthquake in 1985) and I urged her to get out of the house, but she had to find her slippers first! So we finally went out, my father arrived some minutes later with my sister and her friend (my two brothers were in other places, but luckily they were safe). I remember I felt so tiny and insignificant. I realized I was just an infimal particule in the vastness of this world. I realized that material things don't really matter, it's just about your loved ones. And I realized that we have to be humble, never think that we are immune to anything, as we are as any other person. Not better, not worst.

Jorge, thank you for you fascinating and very moving comment. I can only imagine how terrifying your experience must have been. (In my entire life I only remember one tiny earth tremor here that lasted for about 3 seconds and caused no damage and I thought that was frightening!!). I am so glad none of your family were hurt and think it is wonderful that your mother insisted on finding her slippers first. That reminds me of a story my mother tells of when she was a child during the war. When the air raid siren sounded in the night, my grandfather use to go next door to help and elderly lady to the shelter but she refused to leave the house without her hat and shoes as she thought it was undignified!!
To live through an earthquake really must feel like the end of the world...my heart goes out to the people of Japan and to all the countries where such things often happen.
Thank you again for commenting.

Very thought provoking post Christina. Here in the U.S., I've been to the battlefield of Gettysburg, which still stands as one of the bloodiest battles in the American Civil War. Standing out on that field where Americans fought Americans makes you reflect on the the tragedy of war and the strength forged by a nation that struggled to rebuild after such devastating events.

Thank you for commenting, Steven. All I have read and seen in films/videos of Gettysburg is incredibly moving and I can only imagine how it must feel to stand now on that battlefield, knowing how kinsmen killed one another and all believed that theirs was a just cause.
America was founded on such brilliant principles and your Founding Fathers were such enlightened men. I have the deepest respect for the the courage of all of those who were willing to die for their beliefs.