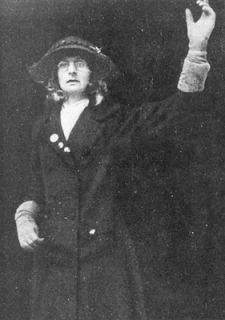 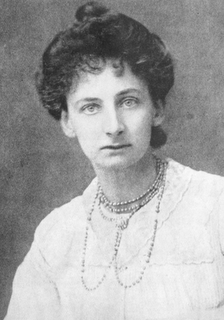 Like Grand Duchess Elizabeth, Lady Constance Lytton (daughter of the Viceroy of India and Queen Victoria's lady-in-waiting) is one of the half-forgotten heroines of history.

A gentle person - a vegetarian and animal lover - who had been a semi-invalid for much of her life,Lady Constance had a chance meeting with a group of working class girls, among whom were some suffragettes. Although she had been opposed to the militancy, she empathised with their cause and gradually began to realize that, without any political voice, all their peaceful protests were ignored. Eventually, she participated in a demonstration to Parliament and was arrested. On account of her aristocratic background she was given preferential treatment in prison and released early. When she received the same treatment a second time, she wished to prove the injustrice of system that treated working class women one way, and wealthy women differently.

She disguised herself as a poor seamstress (as seen in the picture above) and was subsequently arrested for making a protest about the appalling treatment received by other suffragette prisoners in Walton Gaol. Once imprisoned she adopted a hunger strike and was brutally forcibly-fed, without a medical examination which would have revealed her chronic heart complaint and which had been the excuse for her earlier shorter sentences. The treatment she received seriously damaged her health and she never fully recovered.Shortly before her death she wrote a book "Prisons and Prisoners" describing some of the tragic stories of other women prisoners.

In that book she quotes some very beautiful lines, which I think are extremely inspiring:

"Have you seen the locusts, how they cross a stream? First one comes down to the water's edge and is swept away. Then another comes and another, and gradually their bodies pile up and make a bridge for the rest to pass over." She ended by saying, "Well, perhaps I made a track to the water's edge."
Posted by Christina at 18:58

What an inspiring post, Christina! Thank you so much for writing this. Lady Constance did indeed make 'a track to the water's edge.'

Thank you for your comment, Viola! It is sad that so many brave people of the past are largely forgotten now, and it is wonderful to read of their inspiring lives, isn't it?
By the way, your Royal Rendezvous blog is very beautiful! I love your account of Vicky, and had not heard the lovely story of Strauss before. Thank you!

Thank you very much, Christina. I love your blog too, especially the moving post about "Random Harvest" and the inspiring post about Lady Lytton.