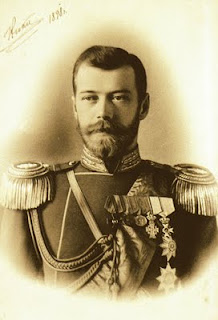 For whatever reason, Prince and Princess Michael of Kent sent some of their 'family silver' to auction. Among the treasures was an album of photographs from the Russian Imperial Family. There are very few material objects that I possess which hold great meaning for me, but one or two things I would be very reluctant to part with because of their significance in my life. Things handled, created or given to me by people whom I love, still hold something of that person in them. It's not the object itself, it's the energy of the person it belonged to; as D.H. Lawrence wrote:

"Things men have made with wakened hands, and put soft life into
are awake through years with transferred touch, and go on glowing
for long years.
And for this reason, some old things are lovely
warm still with the life of forgotten men who made them."

People talk about the redistribution of wealth (which, for the most part, simply means robbing anyone with money out of jealousy!) but wouldn't it be wonderful if things which had meaning for people, landed in the hands of those people simply because they appreciate them? That way, Van Gogh's paintings would never be consigned to safes, not seeing the light of day; beautiful jewels wouldn't be hidden away in bank vaults; people would just treasure what they treasure for whatever reason they treasure it. A diamond is really of no more value to me than a stone gathered on a beach and given to me by someone I love so, if I possessed a priceless diamond and knew someone who loves and appreciates diamonds, it would mean nothing to hand it to them...

But 'some old things are lovely, warm still with the life of forgotten men who made them...' I do hope the Tsar's album was purchased by someone who appreciates its worth!
Posted by Christina at 22:58