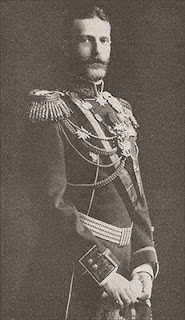 In memory of Grand Duke Serge Alexandrovich, murdered 105 years ago today, this is an extract from Most Beautiful Princess. Ella and Serge are sitting on the shore of the Sea of Galilee, after the consecration of the Russian Orthodox church in Jerusalem.

“It sometimes feels to me,” he said, “as though there is a gap, like a great well, inside us. A sort of wound, an inner loneliness and, no matter how close or intimate our relationships, the wound is so deep that nothing on earth can alleviate it. Do you ever feel that?”
“Yes,” she murmured, “I do.”
“Perhaps everyone does. Some people run around trying to assuage the pain of it; the pain of being alive. Some try to numb it with vodka or opium or laudanum and all kinds of excesses. Others fill every spare moment with activity or seeking out company, small talk, chatter, noise, any noise, being so afraid of silence and solitude because when we’re alone and silent we feel it most deeply. But no matter how we try to avoid it, we know it’s there and there is nothing we can do to be rid of it.”
“Perhaps it’s a reminder that we’re not simply creatures of the earth. We’re pilgrims passing through, longing for heaven.”
“Longing for death?” he frowned.
“No, not death but the Infinite. Perhaps it is a kind of death, though I cannot think that God would create all this beauty, nature, oceans, skies, dawns, sunsets, flowers and creatures to be so ephemeral. I can only believe that what we see here is the reflection of an even greater beauty beyond this life.”
“For here,” he said, “we see ‘but darkly as through a glass’. Isn’t it strange how desperately and deeply we feel this longing that can only be satisfied when our souls are free of these bodies, and yet, faced with prospect of death, we cling to life how ever mundane, dull, empty and meaningless it seems. Even those who live in the most abject poverty, whose lives are nothing but drudgery and misery, would, if faced with the prospect of death, cling with all their might to this existence how ever painful or sad.”
“Perhaps they’re afraid of what is beyond.”
“Or perhaps they fear there is nothing beyond except total annihilation.”
She moved closer to him and rested her head on his shoulder.
“Are you afraid of death, Serge?”
“Not now. Not in this moment when everything is peaceful. Heaven seems so close that I would happily step out of my body and into that life. But,” he sighed, “when we’re back in the city, amid all the clamour and routine and petty irritations, death will no longer seem like a radiant angel welcoming us home, but rather a dark spectre hovering menacingly over our shoulders. That is what I fear, being caught unprepared as my father was. One minute there, walking, talking, breathing...the next minute, blown to pieces.” He was thoughtful for a moment. “If it were not for my faith, I don’t think I would have been able to live with that. For those who don’t believe, such times must be unbearable.”
Posted by Christina at 12:29

Such a beautiful and moving conversation from Serge & Ella. It seems to me that I caught a glimpse of Serge's inner soul. I would love to read your book. Thank you for posting this.

Thank you, Gem, for your kind comment :-). Thank you too for your lovely blog, which I have just discovered and look forward to reading!