In the dark, snowy nights of December, when everything seems so bleak and stark and the trees look like skeletons with their white limbs all frozen, it’s small surprise that there is an ancient tradition of telling ghost stories. Perhaps Nature’s hibernation is designed to take us on inner journeys at this time of year – a sort of balance with the activity of Spring. Or, perhaps, it is just that from days long ago there was nothing else to do on winter nights but tell stories and the season lends itself to mystical or ghostly tales. 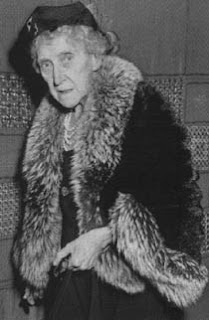 in her most beautiful book, “My Memories of Six Reigns” – in which she comes across as such a delightful, interesting, lovely person of great humility and filled with admiration or understanding of almost everyone she met (including her husband who treated her so badly) – writes of some fascinating and interesting mystical/ghostly experiences. This one, however, is so touchingly beautiful.


“On my return to England, after the dissolution of my marriage, I took a small house in South Kensington and this is what happened to me soon after I moved in. I was arranging my books and odds and ends in my sitting room when the door opened and in walked my eldest brother, Christian Victor. “Oh Kicky, [the pet name we brothers and sisters always called him by], how nice to see you again.” He replied: “I just came to see that you were all right and happy.” He sat down in the chair next to the fire, and I then noticed he had his favourite dachshund on his knee. We talked a little, then he got up and told me I was not to follow him downstairs, that he was very happy and all was well with him. After he had gone and shut the door, I realised that he was in khaki but did not have his medal ribbons on. I then remembered that during the South African War, an order had been issued that officers were not to wear their ribbons so that the enemy would not be able to distinguish them from their men. Only then did I suddenly realise that this dearly beloved brother had died eighteen months previously and lay in his last resting place in South Africa.
My sister came to see me that same afternoon and I told her of what had taken place. She was sitting in the same chair as he had done and when she got up she remarked, “I know he has been here – I can feel it.”

Some people might write it off as some psychological response to her grief for the death of her brother and the stress of the unhappy annulment of her marriage, but both Marie Louise and her sister, Thora, were very down-to-earth women and I believe it completely.
Posted by Christina at 23:14

Christina, do you know how was the princess' relationship with Kaiser Wilhelm II and Empress Dona? She was a first cousin to both of them.

Hello, 'Anonymous' - As I remember (from her book), Marie Louise was very fond of Kaiser Wilhelm and particularly of his kindness towards her brother, Albert, who served in the German Army during WW1. I think she found the Empress Dona rather 'stiff' during her time in Anhalt. It is late here in England but tomorrow, if I may, I will find some specific extracts from her book about them both.

That is very moving and mysterious...I will admit, I love these kinds of stories.

Thank you for commenting, Matterhorn, I do, too!

A lovely anecdote from two very fine royal ladies and sisters. Their story has always fascinated me as, of all the Royals one gerneration down from Queen Victoria, they seemed to lead the least exalted lives. Indeed they were full of admirable good works and very practical, efficient ladies.
The photo is a delight to me as Marie Lousie looks not unlike my own grandmother and great grandmother- though they were minus the pearls!

Thank you very much for your comment, Ewan. I agree with you about these princesses and think that sometimes some of the least known and 'quiet' members of the royal families are some of the most interesting. Your grandmother and great-grandmother must have been very interesting ladies! :-)