A couple of weeks before his fatal visit to Sarajevo, Archduke Franz Ferdinand of Austria entertained Kaiser Wilhelm II at one of his favourite homes, Konospischt Castle, 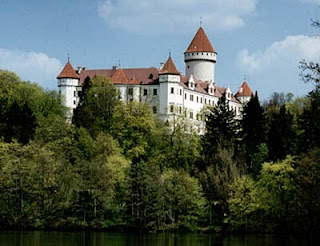 just south of Prague. There, the Archduke had followed his passion to cultivate roses and the Kaiser brought along another avid rose-breeder, Admiral von Tirpitz.
Since Franz Ferdinand had recently been created an admiral in the Austrian navy to enable him to continue his work as Inspector of the Armed Services in Austria-Hungary, one might think, with hindsight, that the meeting of these three men was a political or military meeting in preparation for war. I think, though, that it was simply a social visit, which must have meant a great deal to Franz Ferdinand whose marriage to a lady-in-waiting had led him to feel so excluded from and angry about royal events within Austria.
As I see it, Kaiser Wilhelm and the Archduke formed a friendship which partly accounts for the Kaiser’s horror at his murder a couple of weeks later. (All the other Royal Houses of Europe were equally shocked – in Britain, George V declared a week of mourning; in Russia, Tsar Nicholas declared 14 days...other countries also were in mourning for him).

It has been a little baffling to see what brought together these two men, Franz Ferdinand and Wilhelm, who in so many ways seem so different, and to understand the basis of their friendship, which I believe was genuine. Their contradictions in character and belief are part of the fascination...and, yet again, bring the delight of seeing how this ‘family’ of monarchs of the era seem like a microcosm (or macrocosm) of the contradictions in everyone’s life.

Franz Ferdinand was brusque, unsociable and seemed to despise so much pomp and rigidity in the Habsburg Court. 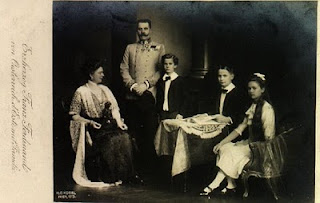 Wilhelm loved to be the centre of attention, revelled in display and pageantry, laughed too loudly and enjoyed everything to do with display. Franz Ferdinand had forward thinking ideas about basing the government of the Austrian Empire on the American model – a sort of federal group of states. 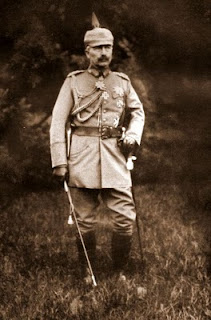 Wilhelm despised the American dream as republican and in 1911 had the bizarre notion of sending battleships towards Manhattan. Franz Ferdinand was utterly devoted to his children and wife; they were always foremost in his mind and he was willing to suffer the humiliation of declaring his marriage morganatic in order to marry the woman he loved. Wilhelm had a difficult relationship with his sons, particularly the Crown Prince for whom he seemed to feel a kind of envy. Wilhelm cared intensely about what people thought of him. Franz Ferdinand didn’t care at all whether or not he was liked.

Apart from their friendship, both were in themselves so contradictory. Wilhelm loved and despised Britain at the same time. He was genuinely kind on occasions but could turn in an instant if he saw his kindness appearing as weakness. He adored his grandmother but had a love-hate relationship with his mother. He banned his sister, Sophie, from returning to Germany because she had converted to Orthodoxy then eagerly encouraged his cousin, Alix, to convert so that she could marry the Tsar. Franz Ferdinand loved roses and nature, but was also one of the most prolific hunters of his age, killing thousands of innocent creatures. He railed against the traditional Habsburgs way of doing things but was not willing to abdicate his position in line to the throne (as Franz Josef’s father had done). At home with his family, he was a doting father and romantic husband who adored his wife....yet to the outside world he appeared so unsociable.

What created a friendship between these two men? I think they both considered themselves outsiders within their own families. Wilhelm, I think, too, saw an opportunity of appearing as benevolent and wise advisor to a man who would soon become Emperor; Franz Ferdinand, I think, was so grateful that Wilhelm was gracious to his wife, who had been so humiliated by his own family.

Had Franz Ferdinand not been murdered, I wonder how it would have all played out...and imagine that the the friendship of these two unlikely men might have created a perfect balance between tradition and progress. Endlessly, endlessly fascinating since neither of them is as one-dimensional as most superficial histories portray them.
Posted by Christina at 23:30

Wasn't Wilhelm the one who allowed Lenin to reach Russia after his exile in Switzerland? By this action, Germany not only helped to cause the worst totalitarian government humankind has seen but also made a great damage to Christianity.

Wilhelm is often blamed for allowing Lenin into Russia but I believe that by 1918, Wilhelm's actual control within Germany - and particularly with regard to the war, was minimal. His ministers and generals often sent him off to review troops in remote places to keep him out of the way, so I doubt that he actually made the decision to let Lenin's train through. Also, unlike Russia's allies, Wilhelm offered safe haven to the Imperial Family during the Revolution and he ordered his brother, Henry, to make sure that any ship bearing the Imperial flag (showing the Imperial Family were abroad) was allowed to pass through the Baltic to safety (he thought that I.F. would be travelling to safety in England).