As my Shattered Crowns trilogy nears its conclusion with the forthcoming book The Betrayal, I am struck by the fact that, in the midst of all the horror, deceit, myths and downright evil of the First World War, there are countless stories of humanity at its finest and most natural. Apart from the well-known story of the football match between British and German troops in No-Man’s-Land at Christmas 1914, there are accounts of French soldiers, lured by the smell of cooking, sneaking into the German trenches to share supper with the ‘enemy’, and German soldiers throwing notes, wrapped around stones, into the British trenches to warn them when the next bombardment was about to begin. There is also the story of the young English soldier who, following an offensive, found the dead body of young German who looked very like him, and, when he went through the pockets of the dead man, he found letters and photos of his family and fiancée, and realised at once how similar their lives were. From then on, amazingly, that machine-gunner continued to 'play at soldiers' until the end of the war but never killed another German because he always ensured that his gun was aimed at an empty space. 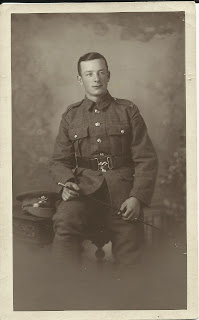 Today I discovered something else, too. My grandfather, who at the age of 18 was a soldier in a Lancashire regiment, was wounded (I think!) and taken prisoner by the Germans. He had great respect for his captors and said that they had twice saved his life. Firstly when he was captured and secondly when, as a prisoner-of-war, he was sent work in a salt mine and was involved in a potentially fatal accident. He was well cared for in a hospital and shown great kindness, as a result of which he made a complete recovery. Even in the middle of all that slaughter, his enemies cared enough to save his life...twice.


It constantly and happily surprises me that, just as plants grow through concrete and make their way through the cracks in paving stones, no matter how wicked events might appear, true humanity – the true nature of Mankind – will always shine through in one way or another.
Posted by Christina at 22:58

Wonderful stories, Christina! As Elena Maria Vidal noted in the preface to one of her novels, the darkness makes the stars shine even brighter :)

Thank you, Matterhorn, and what a lovely analogy of the stars :-)

Is the photograph that of your grandfather ?
Perhaps a caption ?

Yes, that is my grandfather, and yes, perhaps I should have labelled it :-). Thank you for commenting and pointing that out :-)