On 21st May 1845, King Leopold of the Belgians sent his niece, Queen Victoria, a portrait of his late wife, Charlotte – the Queen’s cousin who had died in childbirth twenty-eight years earlier. The King was, by now, happily remarried but it is touching to read his portrait of his first wife and gives a rare glimpse into her character. It seems very clear, too, that this is an attempt on the part of the wily King Leopold, to give Victoria a little sermon about her own behaviour since she, too, had been somewhat imperious with Albert during the early years of her marriage and had been greatly under the influence of her interfering governess Baroness Lehzen! : 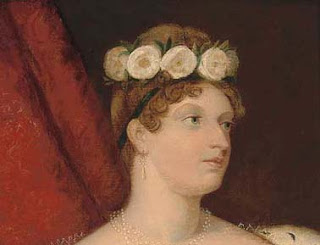 “...My gift is Charlotte’s portrait. The face is extremely like, and the likest that exists; the hair is a little too fair, it had become darker. I take this opportunity to repeat that Charlotte was a noble-minded and highly gifted creature. She was nervous as all the family have been: she could be violent but but then she was full of repentance for it, and her disposition highly-generous and susceptible of great devotion.


I am the more bound to say this as I understood that you had some notion that she had been very imperious and not mistress of her temper. Before he marriage, some people by dint of flattery had tried to give her masculine tastes; in short pushed her to become one day a sort of Queen Elizabeth. These sentiments were already a little modified before her marriage. But she was particularly determined to become a good and obedient wife; some of her friends were determined that she should not; among these Madame de Flahaut must be premiere ligne.


This became a subject which severed the intimacy between them. Madame de Flahaut, much older than Charlotte, and of a sour and determined character, had gained an influence which partook on Charlotte’s part a little of fear. She was afraid of her but when once supported took courage.


People were much struck on the 2nd May 1816 at Carlton House with the clearness and firmness with which she pronounced ‘and obey’ etc. as there had been a general belief that it would be for the husband to give such promises. The Regent [Charlotte’s father, later King George IV] put me particularly on my guard and said, “If you don’t resist she will govern you with a high hand.” Your own experience has convinced you that real affection changes many sentiments that may have been imparted into the mind of a young girl. With Charlotte it was more meritorious as from a very early period of her life, she was considered as the heiress of the Crown; the Whigs flattered her extremely and later...the Tories...also made great efforts to please her.


Her understanding was extremely good. She knew everybody and I even afterwards found her judgement to be generally extremely correct. She had read a great deal and knew well what she had read. Generous she was, almost too much, and her devotion was quite affecting, from a character so much pushed to be selfish and imperious.


I will end here on the subject of my poor, dear Charlotte but I thought that the subject could be interesting to you. Her constancy in wishing to marry me, which she maintained under difficulties of every description, has been the foundation of all that touched the family afterwards. You know, I believe, that your poor father was the chief promoter, though also the Yorks were; but our correspondence from 1814 to 1816 was entirely carried on through his kind intervention; it otherwise would have been impossible as she was a sort of prisoner....”

I had always thought Princess Charlotte very like Queen Victoria, not only in looks, but in soul. Passionate, determinated, even rebel sometimes. I wonder if King Leopold ever noticed this!

I hadn't thought of it until I came across this letter but now I see the similarities and I am sure King Leopold was very aware of it!
Thank you for commenting, Isabela :-)