The Kaiser and his Grandmother 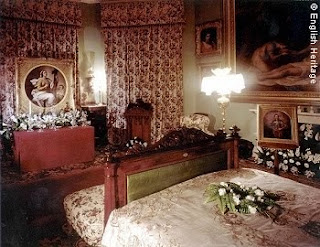 Some years ago, on August 4th (the anniversary of Britain’s entry into the the First World War), I stood on the corridor outside Queen Victoria’s bedroom at Osborne House on the same spot where Kaiser Wilhelm must have once stood, and tried to imagine how it felt to him, wanting to see his grandmother one last time as she lay on her death bed. The Kaiser’s behaviour after the death of his father was so obnoxious and, since I do not believe him to have been for one moment a callous man at heart, I suspect he regretted that impetuous arrogance for many years afterwards. His family, Queen Victoria’s family, were so reluctant to allow him to even visit his beloved grandmother that he arrived quietly and behaved more like a subservient beggar than a pompous Emperor. As a man to whom appearance seemed to matter so much; a man who hardly ever let down his guard and always had to wear a mask, adopt a powerful persona and play the part he had assigned to himself, his presence at Queen Victoria’s deathbed is very striking. It seems like one of the few times in his life when Willy was truly himself – not arrogant, not wanting to be the centre of attention (the very opposite in fact – he skulked in the corridor, wanting only to be allowed into the room) but acting sincerely and out of genuine love.

Fritz Ponsonby, in his wonderful “Recollections of Three Reigns” describes the scene:

“At about half past six we were told the end had come. The Duke of Argyll told me that the last moments were like a great three-decker ship sinking. She kept on rallying and sinking. The behaviour of the German Emperor was beyond all praise. He kept in the background until they were all summoned. The Prince of Wales, Princess Christian, Princess Louise and Princess Beatrice stood around the bed, while the German Emperor knelt down and supported the Queen with his arm....the Emperor never moved for two and a half hours. His devotion to the Queen quite disarmed all the Royal Family.”
Posted by Christina at 23:28

Thank you for this touching story. I have often wondered about the strong affection between Queen Victoria and her first grandchild. His callous treatment of his mother was in no way moderated by his love of his old granny.

Similarly, Victoria's rather gruff demeanor hid a deep love of family as seen in her affection for her numerous grandchildren and their love for her.

Thank you for your comment, Cheryl. I think that, as often happens in families, the relationship between grandparents and grandchildren can be less tense than that between parents and children.
I also think Queen Victoria mellowed with age. Perhaps she saw her children as rivals for Prince Albert's affection and, having had no siblings or childhood playmates, she wasn't used to dealing with children. By the time her grandchildren were born, however, she seemed far less tense and was able to love them more freely...(though - goodness!! -wasn't she nosy about all the intimate details of their lives!!!)

The Kaiser was blown away by political expediency !

Oh....but I think in this case his motive was genuine love. Queen Victoria was one of the few people whom he ever really respected and whose opinion he valued.