Kaiser Wilhelm, German Unification and the End of Empires. 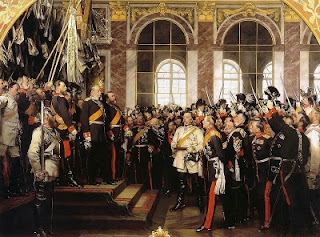 On the 18th January 1871, the King of Prussia stood in the Hall of Mirrors in the Palace of Versailles to hear himself proclaimed the first German Emperor. It’s impossible to overlook the irony that Versailles also gave its name to the treaty which so decimated Germany, almost half a century later.

What an effect must that moment have had on the young Prince Wilhelm of Prussia, future Kaiser Wilhelm II, and grandson of the first Prussian Emperor? As a boy, Wilhelm witnessed Prussia’s rise to power. He was seven years old in 1866 when his father returned triumphantly after defeating the Austrians in the Seven Weeks War and he saw, too, how several German states who had sided with the enemy, were brought under Prussian command. At twelve years old, he witnessed his country’s victory in the Franco-Prussian War and the ease with which the German Empire then came into being. To a small, insecure boy, traumatised by the disability of his arm, and confused by a desperate need to win his mother’s approval, such victories must have seemed incredibly romantic. It seems as though this was the dream around which he created his own persona....and yet it was a persona that he, with all his insecurities, could never live up to. Deeply sensitive on so many levels, and desperate to be liked, he seemed to spend his life hiding behind a mask of over-joviality and a sense of his own magnanimity, interspersed with outbursts of rage due to his feelings of being misunderstood, followed by periods of deep depression.

The interesting part of it all is that, of the 43 years of the German Empire, prior to World War I, Wilhelm was Emperor for 26 years and, during that time, Germany enjoyed peace and prosperity to a far greater extent than any other major power in Europe. While Russia suffered the disastrous war with Japan and the 1905 revolution; Britain battled with the Boers and faced strikes, suffragettes and the persistent problems posed by the Irish Home Rule question; and Austria-Hungary’s fragmentation began, in Germany, industry thrived, workers were given more rights than anywhere else in Europe and there was peace.

Now, here’s a thought...if one could view nations and empires as individual people growing through the stages of their lives, it would seem in 1871, that Germany had reached her adolescence, was beginning to find her own place in the world, and for the next 40 or so years was growing into her prime as a cultured and civilised place to be. Children – unfortunately! – often imitate their parents and the adults around them. If Germany were a person looking at her neighbours, she would see other Empires, some of which (like Austria) seemed already decrepit, desperately guzzling up land, creating colonies, and basking in the glory of power. Where could Germany go to spread her wings as other empires did? Africa, India, South America, Canada, Australia, the ocean...everywhere was already taken. Hemmed in on all sides, she needed to flex her muscles but there was no room to move, so she grew stronger, built better ships, created a more powerful army...and was seen as aggressive.

Kaiser Wilhelm’s life, and stages of life, coincided so clearly with that of his Empire from its first beginnings to its sad end. There was so much potential in Germany in 1871 and I believe Kaiser Wilhelm also had a great deal of potential for good, but it was already the beginning of the end of Empires and it seems as though Germany came too late to the party....
Posted by Christina at 22:57