Turi and other royal animals/angels 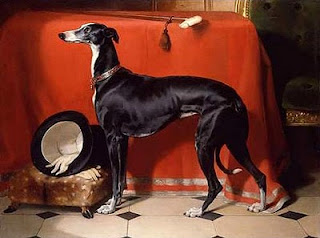 It is very touching that as, 110 years ago tomorrow, Queen Victoria was nearing her passing she asked to see her little dog. According to the report of her physician, Sir James Reid, on 21st January 1901, as she lay in bed at Osborne,

“...the Queen suddenly asked for her favourite little dog ‘Turi’ (Italian Spitz) but unfortunately he was out for exercise and not to be found. However, when he returned he was taken and put on the Queen’s bed, who patted him and seemed pleased to have him beside her.”
This was the day before Queen Victoria died and it is rather beautiful that Turi is mentioned so close to such a momentous historical occasion. Throughout her life, Queen Victoria’s animals had meant so much to her – and to other members of her family – that her letters are speckled with references to them: to Noble’s puppies, to Vicky’s cats at Potsdam, to the ostrich at Windsor, to Beatrice’s poor little dog who was killed by a carriage on the Isle of Wight. Animals were so close to the Queen’s heart that she openly supported the anti-vivisection league and clearly saw her beloved animals as members of the family. It is lovely that, alongside the mythical and family figures who, carved in stone and marble, adorn the corridors and gardens of Osborne, there are are also carvings of Prince Albert’s beloved greyhound, Eos, (who is pictured in the image here) and various other horses and dogs so beloved by the family.

Among the many accounts of the death of Queen Victoria, little mention is made of Turi’s presence and the comfort he brought her. He is rather overshadowed by the presence of Kaisers, Kings, Princes and Princesses...but it was Turi whom the Queen specifically asked for and I would love to know what happened to him afterwards. I hope he wasn’t like Caesar, Edward VII’s dog, who wandered desperately around Buckingham Palace searching for his master after his passing (but was happily given a leading role at the King’s funeral).

People remember the names of horses who carried war leaders into battle – the Duke of Wellington’s ‘Copenhagen’, and Napoleon’s ‘Marengo’ etc. etc. – it’s rather lovely to think of the other animals whose presence graced the lives of great people. Tsarevich Alexei’s spaniel ‘Joy’ and Mary, Queen of Scots’ terrier ‘Gedden’ accompanied their human companions to the death. More faithful than any servant, more comforting than any words offered by friends or family, these half-forgotten angels in animal form remained unflinching to the end and, unmoved by politics or the bickering that goes on between humans, deserve their place in history.

Little Turi deserves his place in history, too, and I am glad his name is recorded.
Posted by Christina at 23:05

Hey! In regards to Turi, she was adopted by the Duchess of Albany (Victoria's daughter-in-law) but alas I don't know how long Turi lived for afterwards. Hope this help!

Thank you very much this. I had no idea what happened to Turi and am glad the Duchess took care of her. :-)