How Well Do You Know...Queen Victoria’s Granddaughters?

(The answers to yesteday's questions are below) 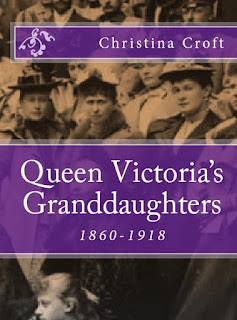 Answers to: How Well Do You Know...Queen Victoria’s Children
1.  From which of her sons bedrooms did Queen Victoria remove a portrait of Lily Langtry while he slept?
Leopold’s
2.  What instrument did Affie teach himself to play?
Violin
3.  What was the name of the attendant known familiarly to the children as ‘Laddle’?
Lady Lyttelton
4.  Which of her sons did Queen Victoria describe as ‘our great delight so full of fun and conversation and so full of anxiety to learn – always at something, never an instant idle – such steam power, such energy it is such a great pleasure to see this…and he is so handsome.”
Affie
5. What was the name of the phrenologist whom Prince Albert invited to examine his children’s heads?
George Combe
6. Which of her children did Queen Victoria describe as ‘ in some things clever…but...very odd; dreadfully contradictory, very indiscreet’?
Louise
7. What did Queen Victoria call ‘the greatest maxim of all’ with regard to children?
That children should be with their parents as much as possible
8. What was the name of the yacht on which the children were sailing from Osborne to the mainland when it struck a smaller boat, resulting in the drowning of four people?
Fairy
9. What was the name of the academy which Louise attended in order to further her artistic endeavours?
The National Art Training School
10. What was the name of the toy fort and barracks which Queen Victoria’s son built for themselves to play in at Osborne?
Victoria Fort & Albert Barracks
11. Which of Queen Victoria’s children did she describe as ‘one bright spot on which I love to dwell’?
Arthur
12. Whom did Prince Leopold wish to marry, but, finding she was already in love with someone else, persuaded his mother to provide for her a home in England so she could marry the man she had chosen?
Frederica (Lily) of Hanover
Posted by Christina at 08:10